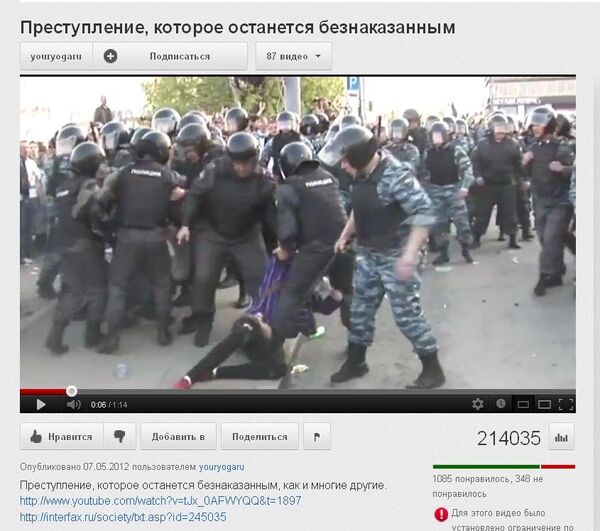 The March of Millions took place in Moscow on the eve of Vladimir Putin’s presidential inauguration. The protesters were allowed to walk down the city's Bolshaya Yakimanka street, but some marchers broke off the authorized route and tried to break through a police cordon and walk towards the Kremlin.

“Young people who in the crowd around the fourth and fifth rows started pushing people in front of them toward the riot police. In response to the attempt to break through, … riot police deployed several rows in a cordon and began to crowd the protesters,” the report said.

Massive unrest then broke out. When the OMON began arresting people, the report says, they “acted very violently, and force was used against random passers-by.”

A riot police officer has been charged with beating a female protester during an anti-Putin rally in Moscow last week, a senior police official said on Friday.

The policeman, whose name was not given, is accused of abusing his position, Investigative Committe spokesman Vladimir Markin told RIA Novosti

The committee acted after pledging on Thursday to "study " video footage which shows the helmeted officer kicking the woman in the stomach as she was being dragged along the street during the March of Millions rally. The Communist Party said the woman, who has not been identified, was pregnant.

The clip, posted on video sharing site YouTube, has sparked outrage in the independent media and blogosphere.

More than 400 people were detained and dozens injured in the worst violence in the city since anti-Putin protests began in December.

Prominent rights defender Oleg Orlov hailed the decision to prosecute the officer. He also said there were many other documented cases of apparent police brutality at the rally.

Mikhail Fedotov, head of the Kremlin's rights council, also welcomed the decision and called for a broader investigation into the clashes.