Moscow Drags Feet on Approval of 'March of Millions' 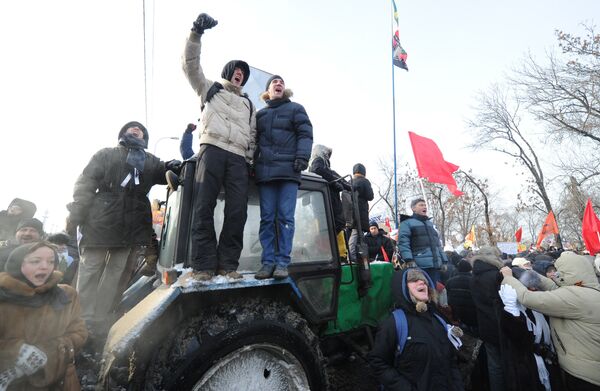 © RIA Novosti . Ilya Pitalev
/
Go to the mediabank
Subscribe
International
India
Africa
Thursday is the last day to coordinate the “March of Millions” that the opposition plans to hold in Moscow on May 6, Left Front leader Sergei Udaltsov said.

Thursday is the last day to coordinate the “March of Millions” that the opposition plans to hold in Moscow on May 6, Left Front leader Sergei Udaltsov said.

“Moscow authorities have hidden from us, they don’t pick up the phone. The organizing committee of the march has given the officials two more hours. After 3:00 p.m. we consider the Moscow mayor didn’t answer us,” wrote Udaltsov on his twitter account.

“If the Moscow mayor doesn’t answer, the organizing committee will make an official statement on holding the march on May 6,” Udaltsov added.

The "March of Millions" in Moscow to protest the results of parliamentary and presidential elections is scheduled for Sunday. Initially the application was a march from a main square in the capital along one of Moscow's main streets that ends at Red Square and the walls of the Kremlin. Moscow City Hall, however, disapproved of that route and proposed an alternative, taking the protesters along the banks of the Moscow River and ending at the city's central Luzhniki Stadium. In turn, the protest organizers offered yet another route along another central street, ending at another large park where they have held prior protests in the past.

President-elect Vladimir Putin is to be sworn into office on May 7.

According to Left Front leader Sergei Udaltsov, the rally on May 6 will gather not only Moscow and Moscow region residents but also people from other regions, “we are talking about tens of thousands of people,” the opposition leader said. So far 5,000 people said that they are ready to participate in the "March of Millions."