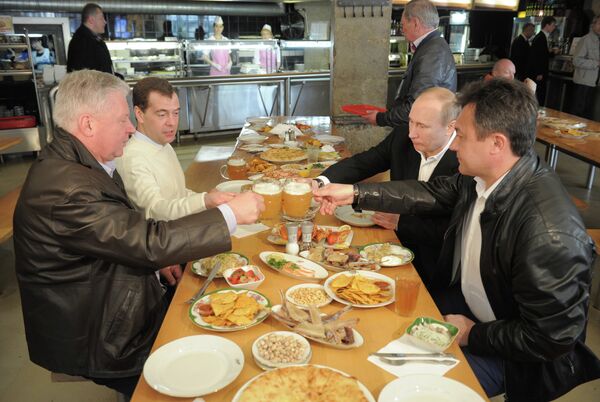 Russia's ruling tandem, the outgoing President Dmitry Medvedev and President-elect Vladimir Putin amused Muscovites on Monday as they popped in a popular pub in downtown city to grab a beer after leading over 100,000-strong Labor Day parade.

Russia's ruling tandem, the outgoing President Dmitry Medvedev and President-elect Vladimir Putin amused Muscovites on Monday as they popped in a popular pub in downtown city to grab a beer after leading over 100,000-strong Labor Day parade.

Zhiguli, a Soviet-style pub just off the central Novy Arbat avenue, is one of Moscow’s oldest bars with a wide range of beer on tap and generous portions of junk food.

“I’ve never been here before,” said Medvedev as the pair was taking their seats at the table served with traditional beer snacks, including Russian salty dried fish Vobla, crawfish, peanuts and potato chips.

Putin and Medvedev however went to the self-service counter to take more food. Medvedev took boiled potatoes with fish and Putin tried fried potatoes with lamb sausage. Both grabbed an old Soviet-era brew which as Putin said “still tastes good.”

Surrounded by lawmakers, trade union leaders and ordinary visitors, Putin and Medvedev had a brief chat about Russian social problems and development of the sports industry.

Meanwhile, several top bloggers reported that an entrance to the pub was blocked for ordinary people during the tandem’s lunch.

“We had been standing in front of the entrance for almost an hour. Yes, they probably did not drive out those who had already been there, but none of the people were let in during the high-profile lunch…and if accidental passers-by found themselves near the entrance, they were forced out by police or the Federal Guard Service,” a blogger and the deputy editor-in-chief of the Echo Moskvy radio station, Vladimir Varfolomeyev wrote in his blog.

Later on the day Varfolomeyev said that the avenue “was cleared up early in the morning” and “there hardly were any accidental visitors inside the pub.”

When Putin and Medvedev prepared to leave after spending almost an hour in the pub, a waitress suggested Medvedev “to come more often.”

"I’m afraid people will not understand if I come here often," Medvedev said in reply.

The May 1 festivities, a yearly tradition inherited from Soviet times, comes a week before Putin's inauguration as president for a third term on May 7.

Opposition activists are now in talks with the City authorities to get an approval for a so-called “March of Millions” anti-Putin protest, slated for May 6, which is expected to bring together thousand of people protesting against the results of March presidential polls that brought Putin to power.