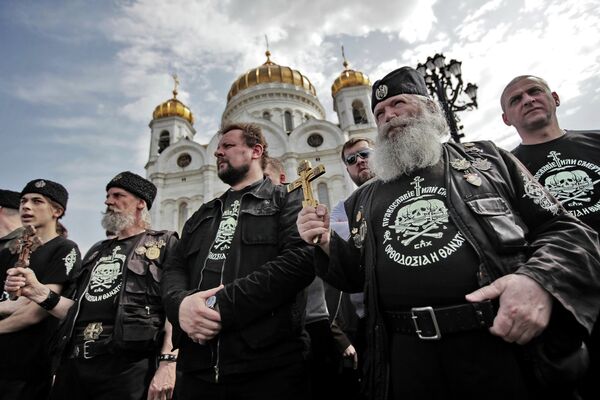 Activists from a fundamentalist Russian Orthodox organization dispersed with Holy Water a group of protesters who gathered on Sunday in downtown Moscow to support jailed female Pussy Riot punk group.

Several dozens of opposition activists gathered near the main Russia’s Christ the Savior Cathedral in Moscow for an unsanctioned rally in support of the members of the all-female punk group Pussy Riot who had been put in custody for performing a song against president-elect Vladimir Putin in the Cathedral in late February.

The rally, a new episode of the anti-government protests that have spread across Russia since December, was designed to unite both believers and atheists in a mass prayer.

Police however cordoned off the territory in front of the Cathedral and detained two organizers of the protest to avoid “provocations.”

Members of the Union of Orthodox Banner Bearers calmed down other participants of the prayer by pouring Holy Water on them and chanting: “No Sodom!”

The Cathedral authorities refused to comment on the rally.

Vandalism and church desecration cases have become more frequent in Russia after Pussy Riot performed what it called “a punk prayer” in February next to the Christ the Savior Cathedral’s main altar, which is off-limits to all but priests. Five group members, clad in balaclavas, chanted a song entitled “Holy Sh*t” against Putin that also contained lines such as “Holy Mother, Blessed Virgin, chase Putin out!”

The girls said the performance was a response to Orthodox Church head Patriarch Kirill’s backing of President-elect Vladimir Putin in the run-up to his landslide March 4 election victory. The patriarch called the 12 years of Putin's rule a "miracle of God" in a televised meeting.

Pussy Riot can face up to seven years in prison if found guilty on hooliganism charges.