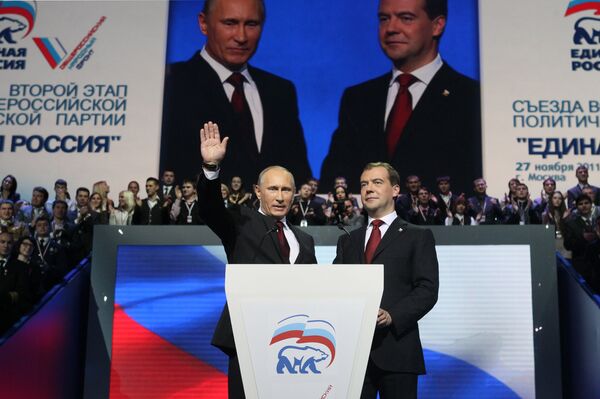 President-in-waiting Vladimir Putin said on Tuesday he would stand down as head of the ruling United Russia party and nominated outgoing President Dmitry Medvedev as its new leader.

“The president should be a non-party figure,” Putin told senior United Russia officials on Tuesday, noting however that the Constitution did not forbid the head of state from holding party membership.

“But the president is, after all, a consolidating figure for all the political forces in the country, for all its citizens. In connection with this, I believe it is correct to give up the leadership of United Russia after my May 7 inauguration,” Putin said.

Medvedev is widely expected to take up the post of prime minister after Putin’s inauguration as president.

Dubbed the “party of swindlers and thieves” by well-known blogger and anti-graft activist Alexei Navalny in 2011 over suspicions of corruption among its higher echelons, United Russia suffered a dramatic slump in popularity ahead of December’s disputed parliamentary polls.

Medvedev headed United Russia’s candidate list going into those polls, which saw it just manage to maintain its State Duma majority. Widespread allegations of vote fraud in favor of the party sparked mass protests in Moscow and other Russian cities.

“As you know, I will nominate [Medvedev] as prime minister and I would consider it right that he head the party,” Putin said.

United Russia was formed in 2001 and has been Russia’s ruling party since the 2003 State Duma elections.