Communists Rally in Moscow Against NATO ‘Base’ 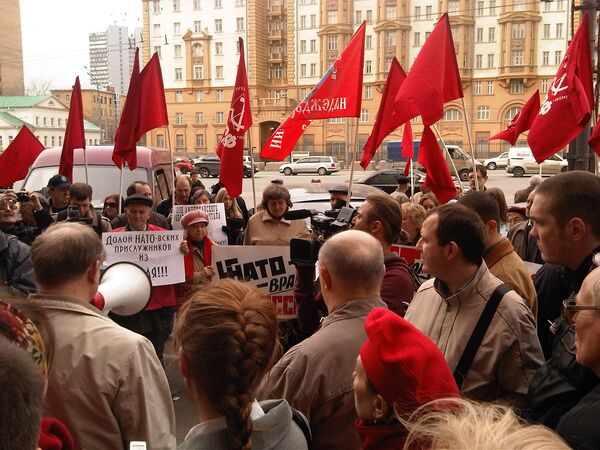 © RIA Novosti . Marc Bennetts
Subscribe
Communist Party supporters gathered opposite the U.S. embassy in Moscow on Thursday to protest the creation of a NATO transit hub in the Volga city of Ulyanovsk – birthplace of Vladimir Lenin.

Communist Party supporters gathered opposite the U.S. embassy in Moscow on Thursday to protest the creation of a NATO transit hub in the Volga city of Ulyanovsk – birthplace of Vladimir Lenin.

“This is a real occupation of our territory by NATO troops,” head of the Communist Party’s Moscow office, Vladimir Rashkin, told a crowd of several dozen protesters. “I am ready to throw myself under the wheels of NATO tanks and armored vehicles if they appear at the base.”

“No NATO in Russia!” chanted the crowd, largely made up of middle-aged and pensioners, with a sprinkling of students. “NATO is our enemy!” read a placard.

Rashkin also called on protesters to attend an April 21 anti-NATO demonstration in Ulyanovsk, where protesters tried to set up tents near the city’s airport earlier this month. Activists also held a hunger strike against the planned hub this month.

“This is a betrayal – only Russian troops should be on our territory,” said student Yekaterina Rubin, holding a red Communist Party flag. “I think [Prime Minister Vladimir] Putin has made some kind of deal with NATO.”

The choice of Ulyanovsk for the hub has intensified Communist anger. The city is named after Lenin, leader of the Bolshevik Revolution, who was born in the city – known then as Simbirsk - in 1830.

Foreign Minister Sergei Lavrov said in March that Russia intended to allow its Cold War-era adversary to use an airport in Ulyanovsk as a transit hub as it winds down operations in Afghanistan.

But the Communist Party responded that the deal would be a “threat” to Russia’s national security. Communist Party veteran head Gennady Zyuganov called the agreement “humiliating” for Russia.

"There has never been a foreign military base in Russia in 1,000 years - and we will not let one appear now," Zyuganov told RIA Novosti on Thursday.

Both NATO and Russian officials have sought to quash rumors that the hub would turn out to be a fully-fledged base.

“There never has been and never will be a NATO military base in Ulyanovsk,” Russia’s Foreign Ministry said in an April 12 statement. The ministry added that the hub would see the “transit of exclusively non-lethal cargoes.”

“This is a new facility. Not a base, not a depot,” said NATO’s Moscow spokesman, Robert Pszel, in an interview with Russia’s Eko Moskvy radio station last week. “There is no question of soldiers or weapons - only nonlethal supplies.”

But protesters on Thursday were skeptical.

“I don’t believe it when they say this will not be a base,” said pensioner Galina Kharkina. “We don’t need any foreign soldiers on our territory.”

The row comes just over a decade after Putin gave his post 9/11 attack blessing to the stationing of NATO troops in former Soviet Central Asian republics that Russia considered part of its own “sphere” and where Russian troops were also based.

But the subsequent souring of U.S.-Russia relations saw the NATO Manas airbase in Kyrgyzstan transform into a focus of geo-political rivalry, with Moscow denying a $2.15 billion aid package was linked to the temporary closure of the base.

Analysts say anger over the Ulyanovsk “base” has been sparked by recent anti-NATO Kremlin rhetoric, in part over the alliance’s plans for a missile shield in Europe. Russia says the shield would be a threat to its national security and has demanded written guarantees that it will not be targeted by the system. NATO says the shield is intended to protect against “rogue” states such as North Korea.

Putin also hit out at Western powers in the wake of protests against his rule this winter, accusing the United States of backing opposition figures who sought his removal from office.

“The Kremlin is now facing the consequences of its own propaganda intended exclusively for domestic consumption,” said Alexander Khramchikhin, chief analyst at the Moscow-based Institute of Political and Military Analysis.

“Afghanistan threatens Russia – not to mention the Central Asian republics – much more than it threatens NATO countries,” Khramchikhin said.

The United Nations says twenty-one percent of the 375 tons of heroin produced annually in war-ravaged Afghanistan travels through Central Asia before hitting the Russian market. Some 30,000 Russians die from heroin abuse every year, according to Health Ministry statistics.

Opium poppy production remains a major source of revenues for the Taliban, whom the United States and its NATO allies have been fighting in Afghanistan since 2001.