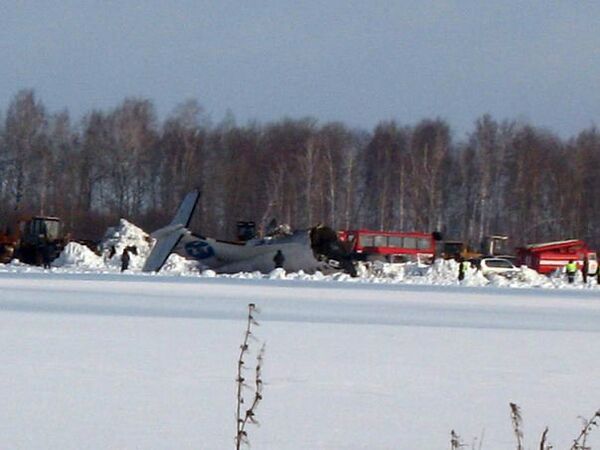 At least 31 people were killed after a Russian passenger plane crashed whilst trying to make an emergency landing shortly after take-off near the western Siberian city of Tyumen on Monday.

At least 31 people were killed after a Russian passenger plane crashed whilst trying to make an emergency landing shortly after take-off near the western Siberian city of Tyumen on Monday, the emergencies ministry said.

All the crew members were among the dead, but twelve survivors were taken to hospital, all in a serious condition. There were no children on board, police said.

There were 39 passengers and four crew on board the turboprop ATR 72 airliner which was operated by UTair airline and entered service in 1992. The aircraft was bound for the oil town of Surgut.

All the bodies were recovered and the plane wreckage, which broke into three main sections, is being examined.

UTair said the aircraft was trying to perform an emergency landing when it went down some three kilometers from Tyumen's Roshchino airport.

The airline has three ATR planes made by the French-Italian manufacturer ATR, according to its website.

The cause of the crash is not clear, although terrorism has been ruled out. Russian investigators said they see technical failure, pilot error or ground control error as the most likely causes of the tragedy.

“Investigators consider a technical malfunction in the plane, or an error by ground services or pilots as most likely causes,” the Russian Investigation Committee said.

"Judging by the nature of the damage to the aircraft, investigators rule out a terrorist attack," Investigation Committee Spokesman Vladimir Markin said.

The flight recorders have been recovered and a team of investigators has flown to the scene from Moscow.

The European experts will work together with the Moscow-based Interstate Aviation Committee (MAK).

President Dmitry Medvedev has put off a planned meeting with leaders of Russia's unregistered political parties because of the crash, his spokeswoman said.

Deputy Transport Minister Valery Okulov has been appointed head of a government inquiry into the crash.

The plane should have been carrying 40 passengers as one person arrived late for the flight, Tyumen deputy prosecutor Valentin Tarasov said.

The crash is Russia's deadliest air accident since a chartered jet crashed on take-off near the central city of Yaroslavl in September last year, wiping out most players from the Lokomotiv Yaroslavl ice hockey team.

UTair share price dropped 3.91 percent on news of the crash.

UTair's stock price has risen 12 percent since March 23 and this latest fall could be seen as correction, traders said.

President Medvedev demanded a drastic cut in the number of domestic airlines following the September disaster and promised to overhaul Russia's aviation industry.