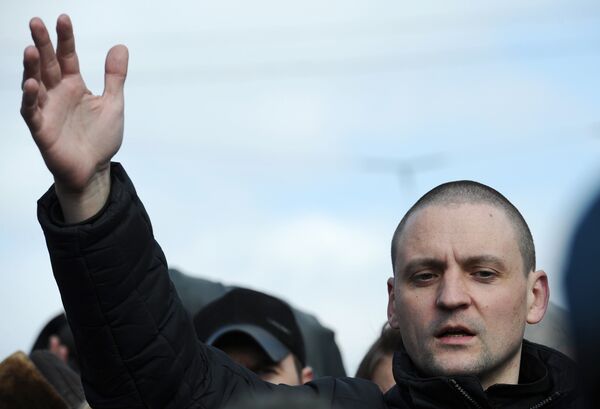 Sergei Udaltsov, the coordinator of the opposition Left Front movement, met with his supporters on Saturday in Moscow’s downtown Pushkinskaya Square to deliver opposition’s plans on the further anti-government rallies, RIA Novosti reported on Saturday.

A meeting that was held in a form of a press conference, brought together about 250 people, including journalists and opposition’s supporters.

Udaltsov who has earlier suggested carrying out such gatherings each Saturday, said that the so-called March of Millions, an anti-Putin rally scheduled for May 6, a day before the president-elect Vladimir Putin’s inauguration, should draw as many people as possible.

“The power reacts only on the mass rallies so there should be many of us on May 6,” Udaltsov said, adding that all the upcoming protests would be discussed with Moscow authorities.

“We don’t want any massacres and crackdowns. We want to take to Moscow’s streets peacefully but with great masses of people.”

As the opposition avoids any reference to the 2004 Ukrainian Orange Revolution, Udaltsov also warned against using the word “maidan” while describing public protests.

Nationwide opposition rallies spread across Russia in early December, following the allegedly rigged parliamentary elections in which the ruling United Russia party headed by the Russian Prime Minister Vladimir Putin, secured a bare majority of seats in the State Duma.

The new protests are directed mainly against Putin, after his victory in March 4 presidential elections. Opposition activists have accused the authorities of ballot stuffing, multiple voting schemes and other violations. However, the number of participants at the rallies has declined significantly compared to those in December.