Arabs, Russia Pat Themselves on Back over Syria 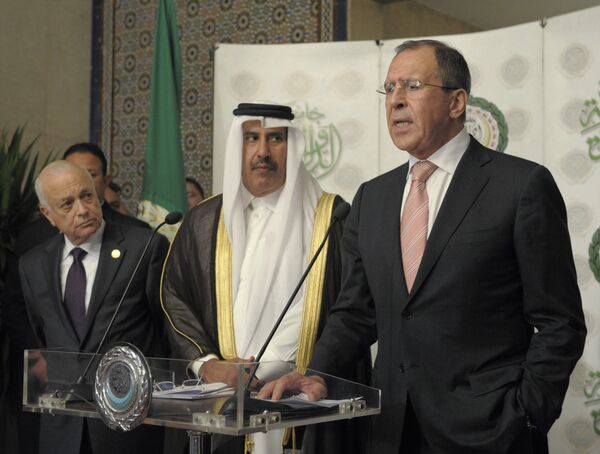 Russia has again demonstrated its diplomatic ability to gloss over differences even when none of the sides are prepared to make concessions.

Russia has again demonstrated its diplomatic ability to gloss over differences even when none of the sides are prepared to make concessions.

Although the positions of Russia and Arab countries on Syria are very different and the crisis in Syria is growing worse, it seemed after the weekend that peace is just around the corner – after all, everybody is actively pursuing peace.

In any event, more than 20 Arab League members and Russia promised to do everything to achieve peace, and it appeared that Russia shared many of their positions following Russian Foreign Minister Sergey Lavrov’s talks in Cairo with his Arab colleagues on March 10.

On Monday the foreign ministers of the world’s leading countries will continue the discussion of the events in Syria at the UN headquarters in New York. The Russian foreign minister and his Arab counterparts have prepared a document for this meeting. In Moscow’s opinion, it should act as the foundation for debates, but will it lead to a settlement in Syria?

The joint statement consists of five points that prudently reflect the principles on which the sides agree.

Everyone wants an end to the violence in Syria “whatever its source.” They agreed on setting up a mechanism for “objective monitoring” in Syria. They also called for “unhindered humanitarian access” in Syria and support for the Syria mission of UN-Arab League envoy Kofi Annan (the former UN secretary-general met Syrian President Bashar al-Assad in Damascus on Saturday and held talks with Lavrov earlier). The final and most important point of the statement is non-interference in Syrian affairs from the outside .

Everything would look great but for the continuous reports of new victims in Syria. There is nothing wrong with these noble goals – the problem lies in the way they are approached.

It has been a year since the start of the conflict in Syria. The UN estimates that more than 7,500 people lost their lives during this time. In two days alone more than a hundred of people were killed, mostly in Homs and Idlib but in Damascus as well.

The Syrian president told Annan there will be no political settlement until the terrorist groups that are creating chaos and destabilizing the country by attacking civilians and soldiers are destroyed.

In turn, the opposition is accusing the government of excessive and “criminal” violence, in particular, the use of tanks and artillery against the rebels in cities, which makes civilian losses inevitable.

Qatari Foreign Minister Sheikh Hamad Bin Jassim Al-Thani told journalists during a break in the Saturday meeting in Cairo that crimes have been committed in Syria and those guilty of killing people must be held accountable. He added it is time to act on a proposal to send Arab and other foreign forces into Syria. Al-Thani expressed his hope of reaching an understanding with Russia on this point. Saudi Arabia also believes that foreign aid to the opposition is inevitable.

Although other Arab countries – Lebanon, Iraq and Algeria – have reacted to calls for intervention with restraint, the opinions of rich and influential Qatar and Saudi Arabia may carry more weight.

Who made the concessions?

So what’s to be done with the afore-mentioned five points? The leading Arab newspaper, Al-Sharq al-Awsat, wrote in an editorial on Sunday that the outcome of the meeting in Cairo is a mystery. Its authors believe that Russia has made concessions to the Arabs by having agreed in secret with the plan to remove Al-Assad. Many Russian media believe that, to the contrary, it was bellicose Qatar that has softened its position.

The Russian Foreign Ministry announced more than once that Russia does not intend to change its position in the near future. This is exactly the case. “Our approach to the settlement of internal conflicts is based on international law and the UN Charter. All states must strictly observe the principle of the inadmissibility of foreign interference, all the more by force,” one of the ministry’s latest statements reads.

In this statement, Russian diplomats even poked fun at the foreign assumptions that after the presidential election Russia would be more prone to cooperate with the West on Syria. “Our position is not formed under the influence of electoral cycles, as distinct from some of our Western colleagues. They shouldn’t judge us by their own yardstick,” the statement reads.

The Arab-Russian agreement reached in Cairo is sooner a tactical move that will not be followed by major changes in anyone’s positions. The Arabs have taken this step because they are afraid of excessive interference in Syrian affairs, understanding that this is fraught with unpredictable consequences.

The Obama Administration is not yet ready for another military operation, either. There is little point in continued squabbling with Russia. And, finally, who will lose from putting down on paper the five points on which everyone agrees? If nothing else, it is a pretext for a handshake.

Russian diplomats have demonstrated their ability to come to terms, and this is after Saudi King Abdullah rebuked Russia during a tense phone call with President Dmitry Medvedev in February. He lashed out at Medvedev for Russia’s veto on a Syrian resolution in the UN Security Council. Shortly afterwards, the Russian Foreign Ministry asked Saudi Arabia for an urgent meeting of foreign ministers in Riyadh but the request was turned down.

This was unpleasant. But finally Russian diplomats have scored a success. The only problem is that it will not help the people of Syria. Right now everyone has decided to put a good face on the matter while playing their own games. Perhaps the art of diplomacy is to pretend in public at least to resolve problems if actually resolving them is too difficult.