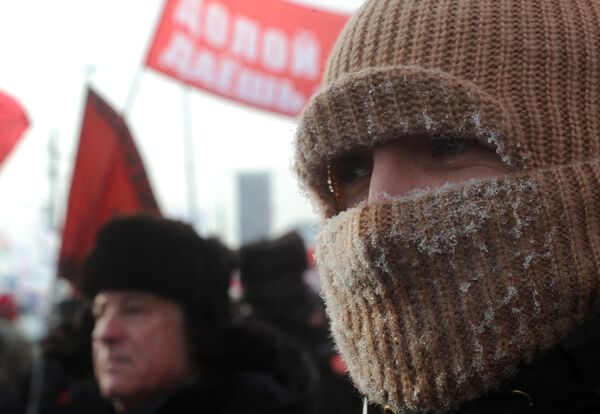 © RIA Novosti . Grigoriy Sysoev
/
Go to the mediabank
Subscribe
International
India
Africa
Russia’s presidential elections look set to trigger days of protests and rallies in Moscow and nationwide as opponents and supporters of Prime Minister Vladimir Putin’s bid to return to the Kremlin prepare to take to the streets.

Russia’s presidential elections look set to trigger days of protests and rallies in Moscow and nationwide as opponents and supporters of Prime Minister Vladimir Putin’s bid to return to the Kremlin prepare to take to the streets.

“Any attempts to hold non-approved rallies will be curtailed and the guilty will face charges,” a Moscow police spokesman said on Friday. He also said over 6,000 officers would be drafted in from neighboring regions to help ensure security.

Opposition plans range from an approved mass demonstration in downtown Moscow to a “flash mob” that aims to form a human circle around the walls of the Kremlin to protest March 4 polls analysts say are almost certain to see Putin secure a third presidential term.

“We’ve seen an intense election campaign by Putin, and it looks to have been effective,” said Maria Lipman, a political analyst at the Carnegie Moscow Center think-tank. “It’s almost a given now that he will win in the first round of voting.”

Moscow Mayor Sergei Sobyanin has vowed, however, not to allow protesters to set up camp in the center of the city and police detained on Wednesday activists who were attempting to hand out tents to opposition supporters.

“There will be no Maidan,” Sobyanin said earlier this week, referring to the Kiev square that was the epicenter of the “Orange Revolution” that brought Western-leaning president Viktor Yushchenko to power in Ukraine in 2004. In December, Putin accused the United States of seeking to provoke a similar revolt in Russia.

After a week of drawn-out talks, opposition leaders and city authorities managed on Thursday to agree on downtown Moscow’s Pushkin Square as the venue for a mass protest set for March 5.

City Hall had proposed that the opposition hold their rally at one of the previous locations for mass demonstrations in December and February. But protest leaders insisted on a more central location, preferably next to the Kremlin walls or at Lubyanka Square, near both the headquarters of the Central Electoral Commission and the Federal Security Service (FSB), successor to the KGB.

Polls carried out by protest organizer Boris Akunin and the Moscow-based Ekho Moskvy radio station had indicated that at least 6,000 people were willing to rally in the city center, even if the authorities refused permission.

The Other Russia party, led by radical firebrand Eduard Limonov, has said its members will defy a police ban to march on the headquarters of the election authorities on March 5.

The opposition also intends to stage at least one other major protest in downtown Moscow on either March 8, 9 or 10, protest organizers have said. Exact details have yet to be confirmed.

Putin supporters plan to gather near Red Square on the evening of election day to celebrate. Media reports suggested on Friday that Putin could make an appearance at the rally.

Another pro-Putin rally is also planned for the day of the polls on Lubyanka Square, The “Our Choice Is Made – Glory to Russia!” rally is expected to attract some 800 people, organizers said. Celebrations are due to continue on the square on March 5.

Public anger over widespread allegations of vote fraud at December’s parliamentary polls has so far led to four major demonstrations in Moscow alone and have taken on an increasingly strident anti-Putin nature.

Putin and his supporters have responded with mass counter rallies across Russia, culminating in an event at a Moscow stadium on February 23.

“The battle for Russia continues!” Putin told a crowd estimated by police at 130,000. “And we will win!”

The opposition alleged that government employees had been coerced into attending the rally.

Protests and rallies are also set to take place in a number of other Russian cities, including St. Petersburg, Novosibirsk and Vladivostok on March 4 and 5.

(The publication of opinion polls is banned under Russian law in the week leading up to the elections.)