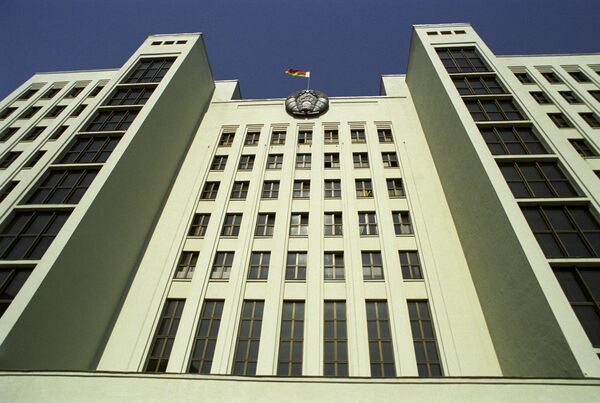 The diplomatic ballet between Minsk and the European Union - Minsk expels two European ambassadors, and the EU in response recalls all of its ambassadors to Belarus - is a caricature of what is happening between Europe and the embattled Middle East (Syria, for one), and indeed between Europe and the rest of "non-Western" world. This is a sad example of the EU responding simply because it feels it must.

The diplomatic ballet between Minsk and the European Union - Minsk expels two European ambassadors, and the EU in response recalls all of its ambassadors to Belarus - is a caricature of what is happening between Europe and the embattled Middle East (Syria, for one), and indeed between Europe and the rest of "non-Western" world. This is a sad example of the EU responding simply because it feels it must.

The EU has barred two hundred Belarusian judicial and law-enforcement officials who took part in the arrests or conviction of opposition members. They will lose any money they have in European accounts and will be denied visas. In response, Minsk expelled the Polish ambassador and the EU ambassador to Belarus. The EU took exception to this and recalled all its ambassadors from Minsk.

Diplomats have always been like theater actors, but in this case they are more like circus performers. The wording of the diplomatic statements is probably the most amusing aspect of the whole affair. A spokesman for the Belarusian Foreign Ministry said: "If during consultations the ambassadors are able to explain in their capitals that the policy of sanctions and pressure has no future, this will be a positive change." "Dictator starts burning the last bridges. Normally does not end well," tweeted Swedish Foreign Minister Carl Bildt.

First, European ambassadors have long been arguing that sanctions against Minsk are pointless. Nobody claims otherwise. The problem is that the reasonable course of action clashes with what can be called the vestiges of European ideology, a style of conduct or "values," so to speak. There are two camps, the "dictators" and the "freedom fighters", just as in Libya - the dictator Gaddafi and democrats from Benghazi.

People who lived in the Soviet Union and remember the communist era know what happens when you put "values" above reason. If you accept the sacred theories of Karl Marx (borne of the early Christians with their ideas of equality and justice, the Renaissance utopians like Tommaso Campanella, and the sans-culottes of the French Revolution) you are required to say certain things. Reality shows, however, that it's better not to say such things, and still better not to put your words into action. This funny discrepancy between words and deeds was most pronounced in Soviet diplomacy in Africa and Latin America. In general, the policy was pragmatic but at times ideology made it very difficult to act reasonably.

Or take a recent example. Poland led the EU's anti-Belarus onslaught but had to argue with Slovenia on this score. The Poles wanted to impose sanctions on one Belarusian oligarch but Slovenia objected because one of its companies had recently won a contract to build a big hotel in Minsk. The economic interests of just one EU member can make all the difference.

This Brezhnevization of Europe is a very sad thing. Of course, there are no risks in making a show of your values to Belarus because this will not precipitate such problems as Greece's default or the dismal future of the Middle East. But these examples of ideology binding the hands of policy causes "European stocks" to lose value.

Does not end well?

The style of the Belarusian regime is repulsive to the classic European. On Tuesday the police in London started clearing a tent camp of radicals from the Occupy London movement. If these radicals stupidly attacked government buildings like they did in Minsk, they would have been jailed. They do the same thing in Minsk but the style and the wording are different. That being said, the Belarusian methods of suppressing the opposition are indeed revolting.

To Europeans, Alexander Lukashenko is "Europe's last dictator." He does not smile, threatens his enemies and speaks like a President Zhirinovsky might. The police are brutal, the acronym KGB is still in use for some reason, and so on. The Belarusian regime is at least ridiculous - at least in the opinion of those who lived in the former Soviet Union. The standard European reaction is different because people in post-Soviet republics know what it is all about from their own experience. We also know that this vestige of the past will vanish, and most likely not with a bang but a whimper.

Bildt said it "does not end well," but very often it does. Until recently, Myanmar (Burma) was very similar to Belarus. Its neighbors in Southeast Asia also saw their own past in that country. The EU and the United States punished the military regime in Myanmar with sanctions, and not because they had great interests in that country, but because there was no other way.

But there is another way. Sanctions produced no result at all because Myanmar's neighbors, China and many others continued trading with it. Myanmar was developing at a good pace. Then its neighbors jointly persuaded the Burmese generals not to be afraid of the West and urged them to launch political reforms. The generals did listen to this advice and started to implement reforms (now there are even proposals to return to using the country's historic name, Burma). Realizing that they put themselves into a ridiculous position and actually isolated themselves from the Burmese events, the EU and the United States are now feigning the impression that they are very happy that they have put the squeeze on the generals. But everyone knows who did the job and the reasons why European Brezhnevization puts the EU into a losing position - not least of which is that it has made the EU a laughing stock in Southeast Asia.

Incidentally, Russian diplomats found themselves in a similar position more than once - for instance, with Turkmenistan or the Baltic countries - regarding the status of local Russians. A diplomatic row could be staged, sanctions imposed and dreams about regime change expressed, but would local Russians feel better as a result? Sometimes time and restraint produce better results.

The story of Belarus is very similar to that of Myanmar. Belarus will get on without Europe for some time. If its economy did not collapse under the impact of the recent financial upheaval, it will continue to persevere. As in the case of Myanmar, the neighbors of Belarus will help. Some people are moving from Russia to Belarus. There was an interesting article recently about the benefits Belarus gains from having less expensive medicine than Russia. This gives much food for thought.

Belarusians work literally throughout Russia and are not considered "immigrants." Their cultural and ethnic markers are dissipated in the vast expanses of Russia. This process is called integration.

Changes are bound to take place in Minsk's political style, but the best changes come naturally, and they are not always immediately visible.