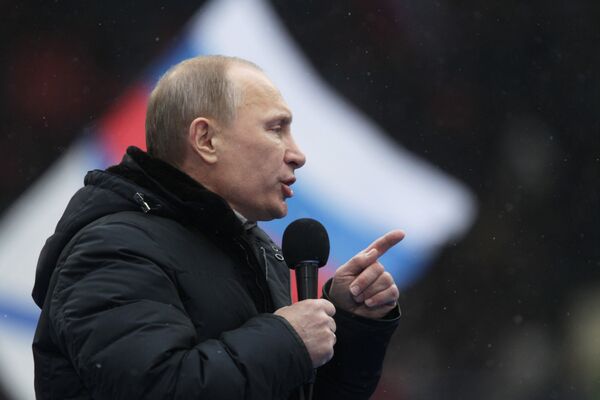 In a lengthy and strongly-worded article focusing on foreign policy issues published in the Russian daily Moskovskiye Novosti, Putin attacked US missile defense plans in Europe and accused NATO of establishing preemptory “facts on the ground” that subvert trust.

“I would not mention this topic if these games were not taking place right on Russia’s borders, if they had not undermined our security, if they did not work against stability in the world,” Putin wrote.

The Russian leader, widely expected to return to the Kremlin following presidential elections on March 4, said he agreed with those who argued that upholding human rights was the top responsibility of sovereign states.

However, he slammed the United States and its NATO allies who justify their own military intervention in third-party states with arguments about the need to defend human rights there, saying such actions create a “moral and legal vacuum” in international relations.

“When human rights are defended from outside, on a selective basis and in the process of this ‘defense’ the very same rights of many people, including the most vulnerable of them, the right to life is trampled on. We’re not talking about a noble cause but about elementary demagoguery,” Putin said.

The 59-year-old Russian leader said NATO alliance members, “above all” the United States, appear to have developed a concept of their own security that was fundamentally at odds with Russia’s understanding.

“The Americans are obsessed with the idea of ensuring their absolute invulnerability, a thing, I would point out, that is utopian and not achievable both from a technological and a geopolitical standpoint.

He said it was imperative that the United Nations and its Security Council retained the ability to counter the “dictate” from any group of states and said no one had the right to usurp UN prerogatives, “especially when it concerns use of force against sovereign states.”

NATO, he said, was trying to control international affairs that were outside the mandate of a “defensive alliance” and described this trend as “very serious.”