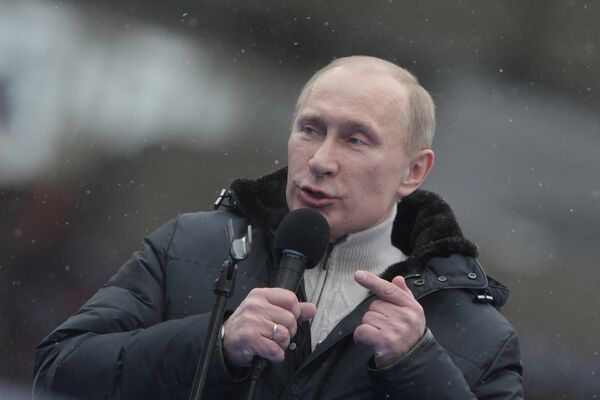 Russian Prime Minister and presidential candidate Vladimir Putin will win the presidential election with 63-66 percent of the vote, according to Russia's largest independent pollster Levada Center.

"Forty-three to forty-six percent of eligible voters are ready to vote for Putin. Among those who have decided to come to the polls, 63-66 percent will vote for Putin," head of Levada Center Lev Gudkov said on Friday.

Russian presidential election is scheduled for next weekend, March 4. Five candidates are running for the election.

He added that 70-71 percent of respondents showed a weak interest in the elections.

Levada Center predicts that there will not be a second round in the presidential elections.

According to a survey conducted by state-run pollster VTsIOM on February 11, Vladimir Putin will win 58.6 percent of the vote, Gennady Zyuganov will take second place with 14.8 percent, and Vladimir Zhirinovsky will come in third with 9.4 percent. Mikhail Prokhorov will get 8.7 percent of the vote and Sergei Mironov will get 7.7 percent. According to VTsIOM, 67 percent of those surveyed said Putin would win after the first round of the presidential election, 20 percent said he would have to go through a second round.

According to a survey conducted by the Kremlin-backed pollster Public Opinion Foundation (FOM), Putin may get 58.7 percent of votes, Zyuganov will follow with 16.2 percent of votes, Zhirinovsky with 8.8 percent. Prokhorov may gain 8.6 percent and Mironov 6.1 percent. Pollsters say 61.8 percent of eligible voters will come to polls.