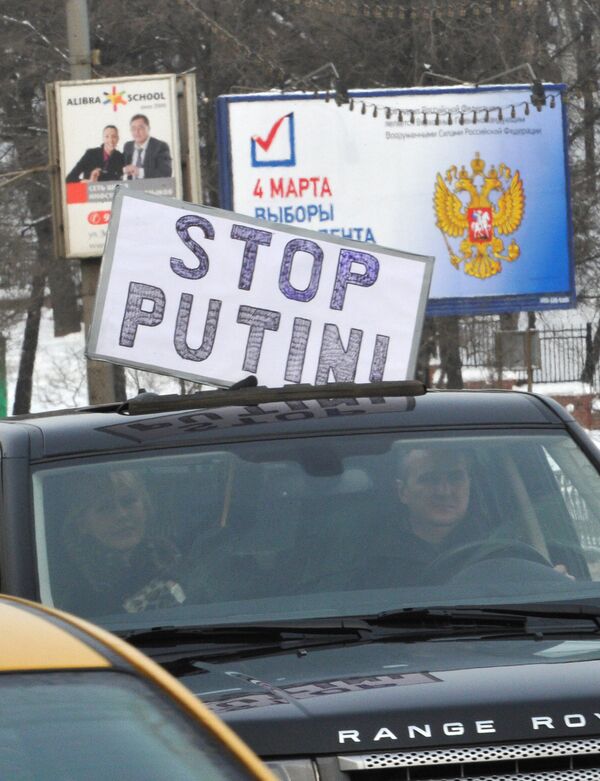 © RIA Novosti . Ramil Sitdikov
/
Go to the photo bank
Subscribe
Hundreds of cars trailing white ribbons drove around downtown Moscow on Sunday to protest against the expected return of Prime Minister Vladimir Putin to the Kremlin in next month's elections.

Hundreds of cars trailing white ribbons drove around downtown Moscow on Sunday to protest against the expected return of Prime Minister Vladimir Putin to the Kremlin in next month's elections.

The ribbons have been adopted by protesters in Russia as a sign of their discontent after what they say was a rigged parliamentary election in December.

"I'm tired of corruption and all the lies, I don't want another 12 years of Putin," Lyudmila, 38, a lawyer, said as she stopped on Novy Arbat, one of Moscow's main shopping stretches, to strap a white balloon to her Volkswagen.

"Ordinary people have no say in politics, we want to change this, we want to show that we're united," Danila, a student, told RIA Novosti. Danila was one of dozens of pedestrians applauding and waving at vehicles circling around Moscow's Garden Ring road.

Organizers said about 2,000 motorists took part in the White Streets rally, while police put the number at 150.

Sergei Neverov, a top United Russia official, said he was not surprised at police figures.

"Any events associated with movement restrictions disrupt the normal life of citizens, which, of course, affects their popularity," he told reporters in Moscow.

A similar rally was staged on January 29 when organizers said around 3,000 motorists took part. Police said there were only 300 participants.

Protesters are trying to maintain momentum after a combined total of around 200,000 people turned out in Moscow alone over the past two months to express their displeasure with the results of the December 4 parliamentary polls and Putin's plan to return to the presidency in March.

Putin, who served two terms as president between 2000 and 2008, remains Russia's most popular politician, but analysts have said rising discontent among middle-class urbanities could see him forced into a potentially damaging runoff.

Pyotr Shkumatov, leader of the grassroots motorists' group Blue Buckets, said there were "provocations" during Sunday's protest, including youths throwing chunks of ice and crying insults at some cars.

"Traffic police also closed off a number of streets to prevent activists from reaching the Kremlin," Shkumatov told RIA Novosti.

He also said that cars brandishing portraits of Putin were getting into the stream of traffic to obstruct protesters' vehicles.

Putin supporters staged their own auto run in downtown Moscow on Saturday. Police said 2,000 cars took part, but the independent Ridus news website said the figure was much lower.