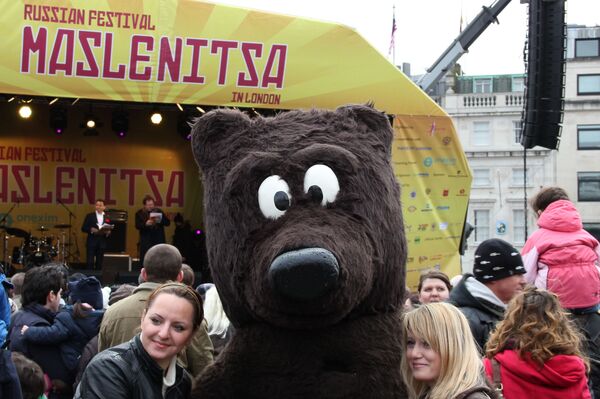 © RIA Novosti . Elena Pakhomova
Subscribe
London will host a week of celebrations of Russian Maslenitsa, the Russian Orthodox equivalent of Shrovetide, starting on Sunday and until February 26.

London will host a week of celebrations of Russian Maslenitsa, the Russian Orthodox equivalent of Shrovetide, starting on Sunday and until February 26.

Russian Maslenitsa in London is the largest annual festival celebrating Russian cultural traditions outside Russia. According to various estimates, the Russian-speaking diaspora in Greater London area numbers about 250,000 people.

Organized by Ensemble Productions, Maslenitsa 2011 will include music, dance and theater performances by well-known and promising Russian performers.

“Since Maslenitsa is celebrated for seven days, we [the organizers] looked for interesting ideas and possibilities of representing the Russian culture in London and will offer a number of various events throughout the week. We hope it will become a tradition,” Ensemble Productions director Olga Balakleyets said.

Traditional Russian pancakes and other national food will also be available.

Maslenitsa in London is part of the Russian Culture Festival, which is supported by the Mayor of London, the Moscow government, the Russian Ministry of Culture, the Russian Embassy in London and the Russian Federal Agency for the CIS.

Shrovetide is an ancient festival dating from pagan times. At first it was a festival that celebrated the arrival of spring and the start of work on the land, but it has long lost its ritual significance and has become a symbolic festival of saying good-bye to winter and welcoming spring.