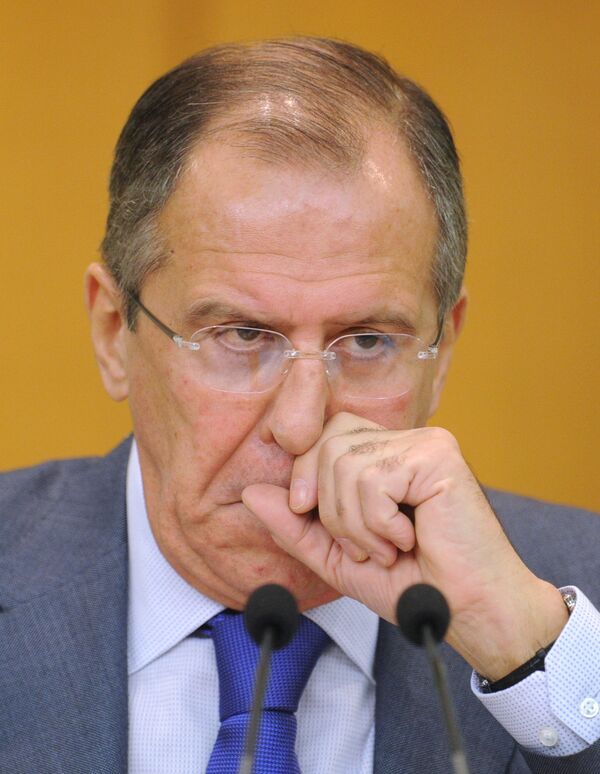 Russian Foreign Minister Sergei Lavrov on Saturday explained why Russia vetoed a resolution on Syria in the UN Security Council.

Russian Foreign Minister Sergei Lavrov on Saturday explained why Russia had vetoed a resolution on Syria in the UN Security Council, saying that without Russia's latest amendments, the draft would be unilateral and would harm Syria if adopted.

Veto-wielding UN Security Council members Russia and China on Saturday blocked the Morocco-proposed draft resolution on Syria that called on President Bashar al-Assad to step down. Thirteen of the council’s 15 members voted in favor of the draft, backed by the Arab League and the West.

Lavrov said he had on Friday sent Russian amendments to the draft resolution to U.S. State Secretary Hillary Clinton and Russia’s envoy to the UN Vitaly Churkin so that all partners could get familiarized with them.

“The rationality and objectivity of these amendments should not cause anyone’s doubt,” Lavrov said.

Some Western countries have been trying to persuade Moscow to support a resolution effectively authorizing a military operation, but Russia has repeatedly insisted that the Western drive for a stronger crackdown on Syria is preparation for a “Libyan scenario.”

In Libya, rebels ousted and killed long-standing dictator Muammar Gaddafi in October 2011 after a months-long military standoff in which they received assistance from NATO forces.

Although UN Security Council diplomats had toned down the latest draft in an apparent move to overcome Russia’s opposition, Lavrov said the Morocco-submitted plan was “unilateral.”

The Russian foreign minister said extremist groups that provoke violence in Syria should be assessed in a proper way, which has not been done. He said the resolution did not set enough demands on anti-government armed groups, and that Russia was concerned it could jeopardize Syria’s national political dialogue.

Besides, he said, the draft resolution contained a demand that all Assad’s forces should withdraw from cities and towns.

“This phrase, without being linked to a simultaneous termination of violence on the part of armed extremist groups, is absolutely provocative, as no president with self-respect, no matter how treated, will agree to surrender inhabited localities to armed extremists without resistance,” he said.

U.S. Ambassador to the United Nations Susan Rice said on Saturday she was "disgusted" by the Russian and Chinese veto on the draft, and that “all further bloodshed” that could follow will be on the two countries’ conscience.

"For months this council has been held hostage by a couple of members. These members stand behind empty arguments and individual interests while delaying and seeking to strip bare any text that would pressure Assad to change his actions,” Rice said.

UN Secretary General Ban Ki-moon also condemned the veto, and his statement distributed through his spokesperson called it “a great disappointment to the people of Syria and the Middle East, and to all supporters of democracy and human rights.”

“It undermines the role of the United Nations and the international community in this period when the Syrian authorities must hear a unified voice calling for an immediate end to its violence against the Syrian people,” Ban said.

Russia along with China already vetoed a European-drafted resolution containing the threat of sanctions against Syria in October 2011.

Lavrov said another problem was the draft’s demand that Assad step down.

Russia, one of Assad’s firm supporters during the uprising against his regime, indicated earlier this week that it would veto the draft resolution calling on Assad to step down and providing for “further measures” should he refuse. Moscow has proposed its own draft, which the West criticized as being too soft.

“We have repeatedly said that we are not protecting Assad but international law. The prerogative of the UN Security Council does not envision interference in internal processes,” Lavrov said.

Lavrov also said on Saturday he and Foreign Intelligence Service head Mikhail Fradkov will visit Syria and meet with President al-Assad on February 7 on instructions from Russian President Dmitry Medvedev.

Russian Ambassador Churkin said after the Security Council vote: “The draft resolution that was put to a vote did not reflect Syria’s realities well enough and sent conflicting signals to the political forces in Syria.”

Asked why Russia initially agreed with the resolution but then changed its mind, Churkin said the situation has changed in the past month since the Arab League put forward its plan for Syria.

The heads of the Russian and Chinese delegations said their countries hope the international community continues its efforts to stop violence in Syria.