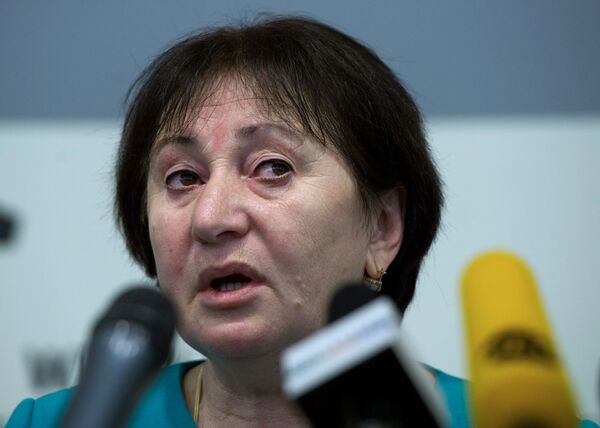 South Ossetia opposition leader Alla Dzhioyeva told RIA Novosti on Sunday she had scheduled her inauguration as president of the former Georgian republic for February 10.

South Ossetia opposition leader Alla Dzhioyeva told RIA Novosti on Sunday she had scheduled her inauguration as president of the former Georgian republic for February 10.

“I will assume office on February 10. I can’t tell you about the place of the inauguration so far. I will turn to the South Ossetia acting head with a request for a civilized transfer of power as befits a legitimately elected president,” Dzhioyeva said.

The opposition leader said her decision was prompted by the unwillingness of the South Ossetia authorities to hear her.

Acting president Vadim Brovtsev was appointed as acting head of South Ossetia in December, after President Eduard Kokoity resigned over opposition protests in Tskhinvali, the region’s capital. Protesters disagreed with the annulment by the Supreme Court of the November 27 presidential runoff won by Dzhioyeva.

The appointment was also part of a deal reached with Dzhioyeva. According to the terms of the deal, Kokoity stepped down and Dzhioyeva obtained the right to take part in the new elections to be held on March 25, 2012.

Kokoity said he agreed to the deal in order to avert an outcome like Ukraine's 2004 "orange revolution."

Dzhioyeva later retracted her signature on the document and demanded that all the legal procedures regulating the transfer of power to the candidate elected by the people of South Ossetia be implemented.

The situation in restive South Ossetia, which declared independence from Georgia in 2008, heated up after Dzhioyeva won the November 27 runoff against a Kremlin-backed rival, regional emergencies minister Anatoly Bibilov.