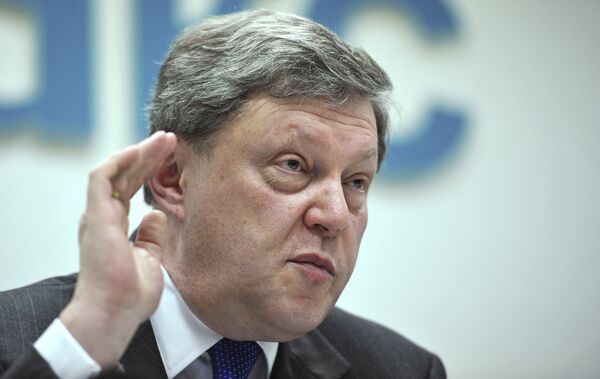 © RIA Novosti . Ramil Sitdikov
/
Go to the photo bank
Subscribe
Grigory Yavlinsky, the founder of the liberal Russian opposition party Yabloko, said on Friday he plans to appeal the decision by the Central Election Commission (CEC) to reject his application to take part in the presidential race.

Grigory Yavlinsky, the founder of the liberal Russian opposition party Yabloko, said on Friday he plans to appeal the decision by the Central Election Commission (CEC) to reject his application to take part in the presidential race.

“We are preparing a lawsuit on the issue,” Yavlinsky told journalists.

Yavlinsky collected two million signatures in support of his bid as required by law but two consecutive checks, the second of which was wrapped up Tuesday evening, showed 25.66 percent of them were invalid, CEC Secretary Nikolai Konkin said. The law caps the amount of invalid signatures at five percent.

On Friday the CEC officially rejected applications by Yavlinsky and Irkutsk Governor Dmitry Mezentsev to be registered as presidential candidates.

The only independent presidential candidate who submitted a valid list of signatures was billionaire Mikhail Prokhorov. Less than five percent of his signatures were deemed invalid. On Wednesday Russia’s election authorities officially registered Prokhorov to run in the presidential elections.

Yavlinsky reiterated that he believes the decision to remove him from the presidential race was political.

“I stress that beyond any doubt, the decision is politically motivated. The decision is meant to create the most comfortable conditions for the current grouping in power to hold the elections,” he said.

“The decision is also aimed at depriving a considerable part of Russian nationals of an opportunity to make a conscious choice,” the Yabloko founder said.

He pledged to do everything possible for “people who care about the country’s future to be able to take part in the political process.”

Putin, who held the presidential post from 2000 to 2008, is considered the most likely candidate to win the presidential election on March 4. However, analysts say his declining popularity could see him forced into a runoff.

The Putin-led United Russia party won the December 4 State Duma elections but critics claimed the vote had been slanted in favor of United Russia. The authorities admitted that minor violations had occurred during the vote and pledged to investigate them but denied claims that the irregularities affected the vote’s results.

Vote rigging allegations led to the largest anti-government protests for almost two decades, with demonstrators demanding a rerun and the dismissal of CEC head Vladimir Churov, dubbed “the wizard” following the vote.