Medvedev Says May Run for President in Future 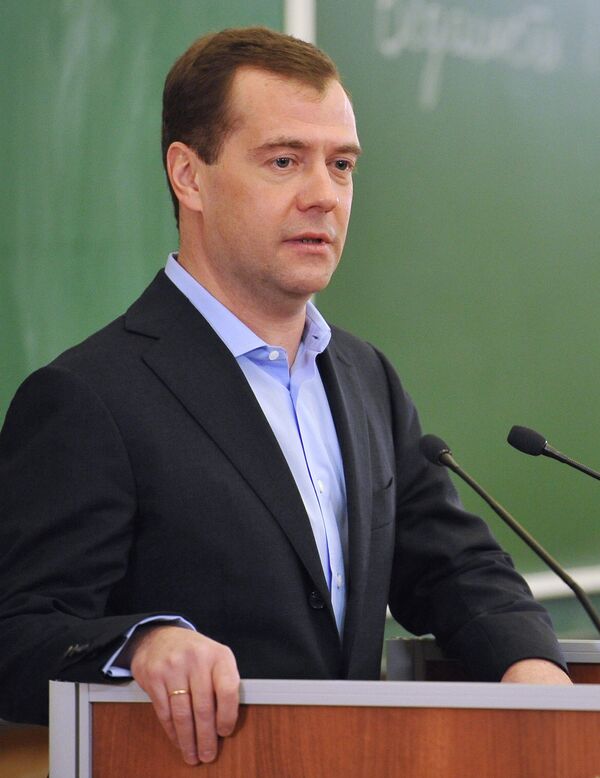 Russian President Dmitry Medvedev, who decided against running in the March 4 presidential elections, said on Wednesday it is possible that he might run again in the future.

Russian President Dmitry Medvedev, who decided against running in the March 4 presidential elections, said on Wednesday it is possible that he might run again in the future.

Medvedev, whose presidential term expires this year, proposed last September Prime Minister Vladimir Putin to run in the next election and said he was willing to take the post of the premier if Putin wins the election.

“I have never said that I would not stand again. I remind you that I am only 46,” Medvedev said at a meeting with journalism students at Moscow State University. “That is not such a critical age to refuse further political battles. But this time I have definitely decided not to stand."

He told the students that the decision not to run for president was politically founded because two people representing the same political power should not “elbow each other.”

“The one who has more chances to win now should proceed forward. The March elections will prove whether it is right or wrong,” the president said referring to Putin.

Putin is seeking to return to the Kremlin after being barred by the constitution from standing for a third consecutive term in 2008. State-run pollster VTsIOM indicated last week that his support among voters had risen from 45 percent earlier this month to 52 percent, just enough to give him victory in the first round of the elections.

Medvedev reiterated his readiness to serve as the prime minister, but even if Putin loses in the presidential election, the president said he will definitely remain in politics.

“I cannot say in what capacity, but I can sincerely say that I will not quit politics,” he added.

With recent mass opposition rallies across Russia following the December parliamentary elections that the opposition claims to be fraudulent, journalism students asked Medvedev whether he was ready to meet with the protesters and talk to them.

“I am ready to talk to anyone, but I will not go on purpose for having talks at rallies, whether they are dedicated to parliamentary elections or any other event. If someone wants to tell me something, I am ready to meet him,” he said adding that addressing rallies and giving explanations “is not the president’s business.”

The president said that despite various predictions on the nearest future of Russia and the March elections, the issue of a revolution is out of the question.

“I do not want the events in our country to develop in line with a revolutionary or any other extreme scenario and, to tell you the truth, I do not see enough prerequisites for this,” he said.

Medvedev said Khodorkovsky’s fate “is sad” and he “empathizes with him,” but “he is guilty as long as the verdict against him is in power.”