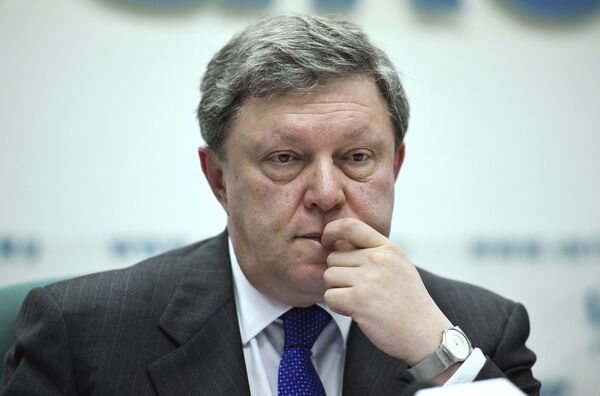 Yabloko party founder Grigory Yavlinsky will be banned from the presidential race over invalid signatures in his support, the Central Elections Commission said on Tuesday.

Yabloko party founder Grigory Yavlinsky will be banned from the presidential race over invalid signatures in his support, the Central Elections Commission said on Tuesday.

Some analysts said the removal was part of the Kremlin’s plan to allow Prime Minister Vladimir Putin to win in the first round of the vote, though others denied ulterior motives behind the decision.

Yavlinsky collected two million signatures in support of his bid as required by law, but two consecutive checks, the second of which was wrapped up Tuesday evening, showed 25.66 percent of them to be invalid, commission secretary Nikolai Konkin said. The law caps the amount of faulty signatures at five percent.

“The commission will hold a session later this week to officially refuse registering Grigory Yavlinsky” for the March 4 vote, Konkin said.

Prokhorov will be the only independent to be included on the ballot, along with candidates from the four parliamentary parties, who were not required to collect the signatures. One of the four is Putin, fielded by the ruling United Russia party and expecting to return to the presidency after two consecutive terms in office in 2000-2008.

Yavlinsky made no comments on Tuesday, his spokeswoman Ekaterina Magina told RIA Novosti by telephone because he was presently touring the regions. But senior party boss Ivan Bolshakov promised the party would fight Yavlinsky’s removal, Rusnovosti.ru reported.

Yabloko party's founder, Yavlinsky, is set to appear at the anti-government rally in Moscow on February 4, which 21,000 have signed up for on Facebook as of Tuesday evening.

Yavlinsky, 59, has been active in politics since the late 1980s, and ran for president twice, in 1996 and 2000. He is known for his critical stance on the Kremlin, and retains a small, but viciously loyal core constituency among intelligentsia and the middle class in big cities.

The Kremlin had no hand in Yavlinsky's dismissal, who paid the price for abandoning active politics in the late 2000s when he handed over the reins to Sergei Mitrokhin, alienating party members on the ground, said Alexei Mukhin, head of the Center for Political Information.

Yavlinsky simply failed to organize a proper signature collecting campaign, agreed Sergei Mikheyev, head of the Center for Political Conjecture. Meanwhile, Prokhorov, whose fortune is estimated $18 billion, could afford to “simply flood the collectors with money” and ensure the desired result, the analyst said.

“Yavlinsky would be unable to prevent Putin from winning in the first round of the election anyway because their constituencies have nothing in common,” Mikheyev told RIA Novosti by telephone.

But Nikolai Petrov of the Carnegie Moscow Center said the two to four percent that Yavlinsky could have garnered may be crucial for Putin’s first-round victory.

Yavlinsky’s removal “was precisely because they’re banking on winning in the first round,” Petrov said.