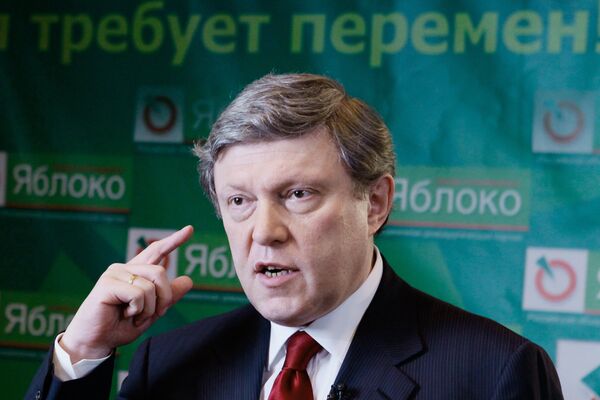 © RIA Novosti . Ruslan Krivobok
/
Go to the photo bank
Subscribe
The Central Election Commission says it is ready to disqualify Yabloko party founder Grigory Yavlinsky from the presidential race because too many of his signatures of support are invalid, agency secretary Nikolai Konkin said on Tuesday.

The Central Election Commission says it is ready to disqualify Yabloko party founder Grigory Yavlinsky from the presidential race because too many of his signatures of support are invalid, agency secretary Nikolai Konkin said on Tuesday.

Yavlinsky had to collect 2 million signatures in support of his bid but the commission checked a 400,000-signature sample this week and reported 23 percent of them to be invalid, well above the 5 percent limit allowed for discrepancies.

A second check of a 200,000-signature sample was halfway through as of midday Tuesday but the combined percentage for both samples still stood at 24 percent at that time, Konkin said. That renders Yavlinsky ineligible for inclusion on the ballot for the March 4 election.

“The amount of invalid signatures gives the commission the right to refuse his registration” for the election, Konkin said. He added the formal decision was to be announced on Tuesday evening.

Yavlinsky’s problems came as a surprise for the presidential administration, Vedomosti reported an unidentified Kremlin official as saying on Tuesday.

It is technically impossible to collect 2 million signatures nationwide in one month, a Central Election Commission official told the newspaper, on condition of anonymity.

The commission approved the signatures collected by billionaire-turned-presidential hopeful Mikhail Prokhorov but not those of Yavlinsky and Irkutsk Governor Dmitry Mezentsev, who is seen by most observers as a “technical candidate” of the Kremlin.

Yavlinsky, who ran for president in 1996 and 2000, said on Monday the authorities wanted to get rid of the army of 15,000 volunteers that Yabloko amassed to monitor the March 4 vote.

The favorite to win the presidential race is Prime Minister Vladimir Putin, who was spared signature collecting because he was nominated by a parliamentary party. Three other parties represented in the State Duma also fielded their candidates for the vote.