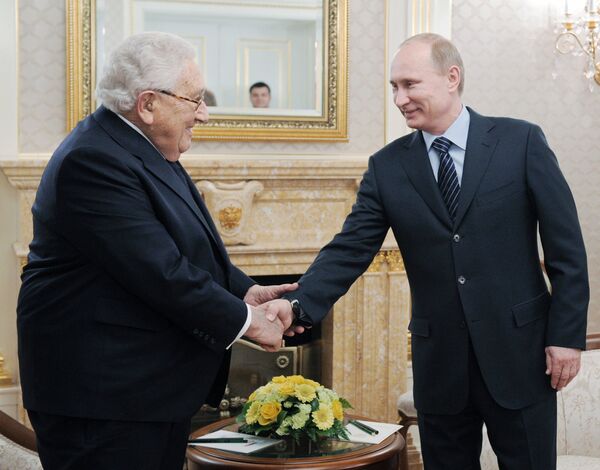 He also said that the Russian premier and the 1973 Noble Peace Prize winner had “exchanged opinions about the situation in the world.” He declined to give further details on what he described as a “private meeting.”

"We have a very old, friendly relationship," Putin told Kissinger, 88, as the two met for closed talks.

This was the tenth time they had held met over the years, Peskov said. The two men have often traded compliments, with Kissinger calling Putin “extremely intelligent” in a 2007 interview with Time magazine.

The meeting took place just weeks before the March 4 presidential elections, at which Putin is due to seek a third stint in the Kremlin. He was barred by the constitution from running for a third consecutive term of office in 2008 and stepped down in favor of his handpicked successor, Dmitry Medvedev.

Analysts have suggested that Putin’s expected return to the presidency could see a rollback of the so-called “reset” in U.S.-Russia relations.

The talks also came amid growing political tension in Russia, which was rocked late last year by the biggest anti-government protests for some two decades over alleged vote fraud on behalf of Putin’s ruling United Russia party at the December 4 parliamentary polls.

Putin has accused the United States of supporting the recent unrest and said the current secretary of state, Hillary Clinton, had given “a signal” that opposition leaders had acted on.

Earlier this week, a report on state-run television said the new U.S. ambassador to Russia, Michael McFaul, was seeking to provoke revolution in the country. Camera crews filmed opposition figures arriving at the U.S. embassy to “receive instructions” from the new ambassador, who later paid visits to the Kremlin and Russian government.

However, analysts were doubtful that the arrival in Russia of Kissinger - credited with helping to usher in an improvement in U.S-Soviet ties in the 1970s - would result in a thaw in current frosty relations between Moscow and Washington.

“I don’t believe the meeting has any political significance,” Fyodor Lukyanov, editor-in-chief of the Russia in Global Affairs journal, told RIA Novosti. “Kissinger doesn’t have any influence on current U.S. policies.”

“Kissinger is, of course, a living legend… but for Putin it is more likely to be simply an interesting and pleasant meeting between two good friends or acquaintances,” he added.