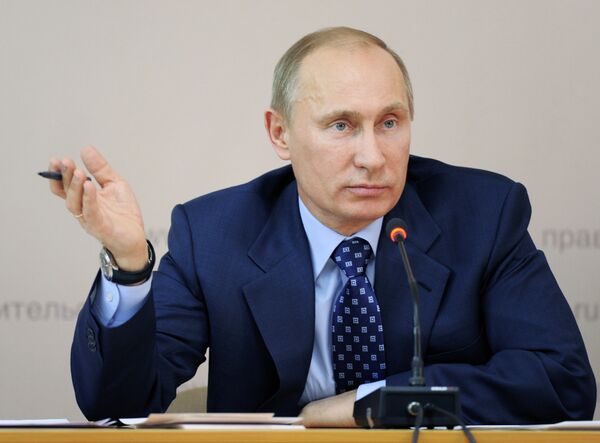 © RIA Novosti . Yana Lapikova
/
Go to the mediabank
Subscribe
International
India
Africa
Prime Minister Vladimir Putin is trying to swing undecided voters in his favor by accusing the opposition of lacking a solid political platform, but the strategy may backfire as his own campaign is vague in details and can hardly be sold to disillusioned voters, political analysts said.

Prime Minister Vladimir Putin is trying to swing undecided voters in his favor by accusing the opposition of lacking a solid political platform, but the strategy may backfire as his own campaign is vague in details and can hardly be sold to disillusioned voters, political analysts said.

“There’s a lot of talking these days about renewing the political process. How are we meant to come to an agreement? How should we arrange authority? Pass it on to ‘the best people’? But what’s next?” Putin wrote in an article for Izvestia, also available on his campaign site Putin2012.ru.

“I’m worried how we have practically no discussion about what to do apart from elections or after them,” Putin wrote on Monday, adding that his own publication was an invitation for dialogue on the matter.

It is a message to a sizeable constituency that has been growing critical of Putin but which is also unimpressed by the opposition and whose vote the prime minister wants to win, said Sergei Mikheyev of the Center for Political Assessment, a Moscow-based think-tank.

Boris Makarenko of the Center for Political Technologies agreed that Putin was addressing “those who weren’t on Bolotnaya [Ploshchad],” where dozens of thousands rallied on Dec. 10 in the first protest against vote rigging.

But he also noted that Putin’s own platform is also lacking in detail, including on how exactly he aims to create 25 million jobs he has been promising, which may undercut its effect on undecided voters.

“It worked before but now the public is disillusioned,” he said.

The allegation, voiced in Putin’s own presidential program, is largely correct but that is due to the fact that political competition has been severely limited during his decade-plus in power, opposition leader Ilya Yashin told RIA Novosti.

“Putin is trying to convince the public that there’s no alternative to him,” much like he has done in previous elections, Yashin said.

Analysts and independent politicians also said that while the tactic of accusing opponents of lacking a coherent plan for future has worked for Putin in the past, it may have less impact after last month’s anti-governmental protests, which indicated that much of the populace is demanding immediate change, not elaborate long-term planning.

Putin's Monday article serves as an introduction to his program for the March 4 presidential elections. Putin will run for a third presidential term after serving from 2000 to 2008 and then remaining Russia’s de-facto leader for another four years as prime minister.

Putin acknowledges in the article a grassroots drive for political change but notes that protesters lack long-term strategy for the country’s development.

“This is traditionally to be blamed on weak public control over politicians and the underdevelopment of civil society in Russia. Things are changing, but very slowly,” he wrote.

“I think Russian citizens must have the opportunity to discuss not just politicians but also their politics; the platforms that various political leaders intend to put into action, ” Putin added.

Putin’s representatives said earlier that he is penning a 100-page platform by hand and would present it in its entirety by Feb. 12. The 3,300-word document released on Monday touts his government’s economic achievements in the past decade and promises to create 25 million new white-collar and well paid blue-collar jobs within the next 10 years.

One of the leaders of the anti-Putin protesters, Boris Nemtsov, dismissed the criticism in a telephone interview on Monday, saying most opposition groups, including his own unregistered People’s Freedom Party, have platforms readily available on their web sites.

Putin said in the article that he invites such discussion, though he had ridiculed opposition leaders in a televised call in show last month, saying that there are no partners for dialogue among the opposition.

“Well, then we’ll continue on Feb. 4,” Nemtsov added in a reference to a new opposition protest scheduled in Moscow. Some 17,000 have signed up on Facebook for the event as of Monday, which will be the third in a series of protests against alleged vote rigging in the December 4 State Duma vote. Two previous rallies in December were the biggest opposition events since 1993.

Protesters demanded a repeat election, the sacking of the head of the Central Election Commission, Vladimir Churov, and liberalization of political legislation. Only the third demand was partly met by the Kremlin so far but the proposed liberalization is to become effective only for the 2016 federal elections.

Nemtsov was given the option of voicing the demands last Saturday in primetime on the state-owned Russia-1 channel, returning to federal television after a long absence that he blamed on an informal Kremlin-imposed blacklist. He focused on short-term political goals in his speech.

Yashin, a co-organizer of last month’s protests, also noted most opposition groups have platforms available at a click of a mouse but conceded these platforms were not always up to par.

“These platforms are largely declarative but that is because we have no institutionalized method of getting political programs to compete,” Yashin said.

He was echoed by Makarenko of the Center for Political Technologies think-tank, who said that the “opposition has been kept on the outside looking in for too long.”

Draconian political legislation has all but prevented political groups, independent of the Kremlin, from obtaining formal registration required to participate in legislative elections. Only two political parties, A Just Russia and The Right Cause, have been registered since 2006, both of them Kremlin-connected groups created from mergers of previously registered parties.

Presidential candidate Vladimir Zhirinovsky of the Liberal Democratic Party also questioned Putin’s attempts to play up his skills in country management, telling journalists on Monday that “the country ranks last on economy” after the last recession. He did not elaborate on this. Putin routinely attributes Russia’s relatively painless passage through the 2008-2009 global economic crisis to his own leadership, a claim he reiterated in his Monday article.

Still, analysts tended to side with Putin on the opposition. Mikheyev said that the current protest drive simply unites too many different groups, from Communists to liberals to nationalists, to produce a meaningful political program.

“They’re only united by their dislike of Putin,” he said.