Can the Yury Dolgoruky fill the Yekaterinburg’s shoes? 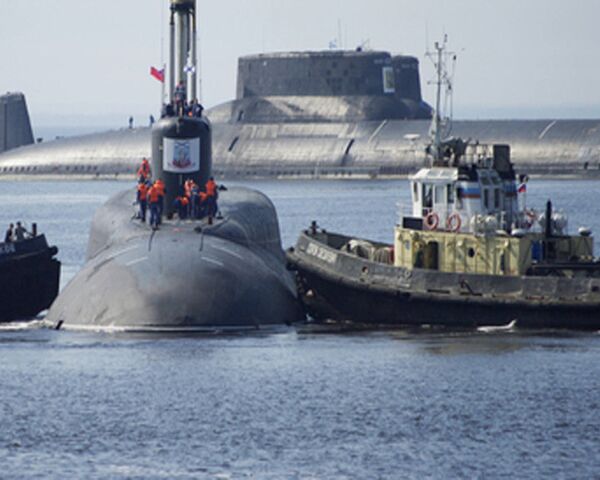 Experts believe that while the Yury Dolgoruky strategic ballistic missile submarine is capable of filling in for the Yekaterinburg, which was damaged by fire shortly before the New Year, it will not fix the deficiencies in Russia’s nuclear shield.

Experts believe that while the Yury Dolgoruky strategic ballistic missile submarine is capable of filling in for the Yekaterinburg, which was damaged by fire shortly before the New Year, it will not fix the deficiencies in Russia’s nuclear shield.

The long arm of the Navy
The Yury Dolgoruky, the first Borei-class SSBN carrying Bulava missiles, is one step away from being put into service. The second submarine, the Alexander Nevsky, set sail for testing in fall 2011. A third vessel, the Vladimir Monomakh, is still under construction.
Yet another submarine of the same class is still on the drawing board. Its preliminary name is the Svyatitel Nikolai and it will reportedly have 20 missile silos versus 16 on the earlier models.

In addition to the Svyatitel Nikolai, the Navy will likely receive another four Borei-class subs, bringing the total figure to eight. The number of Bulava missiles on them will be either 128 or 148, if the reports about the 20-silo model prove true.
This will make it possible to decommission the older SSBN’s (667BDR- and 667BDRM-class submarines), which currently constitute the naval component of Russia’s Strategic Nuclear Forces (SNF).

Forced downtime
The end of 2011 sprung an unpleasant surprise for the Navy. Fire broke out on the Yekaterinburg on December 29, destroying the submarine, which was being stored in dry dock at Shipyard #82 for maintenance.

The fire destroyed the sonar complex, cable routes, and the acoustically-treated light hull. Luckily, the weapons compartments and the central station were not damaged.

According to Deputy Prime Minister Dmitry Rogozin, the newly appointed caretaker of the military complex, the submarine reconstruction project will be launched in June 2012 along with scheduled maintenance that “had to be carried out in 2013 anyway.”
It might take not so long to return the Yekaterinburg to service: its sonar complex can be replaced rather soon because it was only installed in 2003, a fact that will likely minimize design and manufacturing problems.

But the Yury Dolgoruky will simply fill in for one of the six 667BDRM-class submarines, whose temporary withdrawal from active status can only worsen the unfavorable state of affairs in the Strategic Nuclear Forces.

The prospects of the Russian nuclear triad in the next decade can inspire cautious optimism at best among the military-political leadership. The rate of decommissioning of warheads capable of reaching U.S. territory is much higher than the rate at which new ones are being commissioned.

This fact explains the recent vigorous efforts to reform the Strategic Missile Forces and the naval strategic nuclear force. Some results are already in evidence: Russia developed and commissioned the Bulava missile and redesigned the single-warhead Topol-M missile for MIRV’ed warheads (a modification codenamed Yars). There are reports that the new missile systems are undergoing testing.

The same goes for plans to develop new silo-based liquid-fuel carriers. Recall that the majority of Russia’s land-based SNF is represented by rapidly ageing Soviet-made missiles.

Slightly over one hundred heavy silo-based R-36M2/MUTTH and UR-100NUTTH missiles capable of carrying 10 and six MIRV warheads respectively account for 80 percent of all warheads in the strategic land component. The rest are single-warhead Topol and Topol-M missiles and a handful of Yars missiles.

To quote Commander-in-Chief of the Strategic Missile Troops Sergei Karakayev, all UR-100NUTTH missiles will be decommissioned by 2017 to be followed by practically the entire R-36M family by 2021. (Earlier it was reported that these missiles could remain in service till 2026, but perhaps this applies only to some well-preserved specimens.) Even in the best of circumstances, the new liquid-fuel missiles will have only just started being supplied to the forces by that time.

The rate of commissioning of Yars missiles (and their potential successors which, as Karakayev hinted, might be tested in 2015) is unlikely to be high enough in the next decade to keep the force unchanged.

A hole in the bottom of New START
Some Russian experts believe it is possible that Russia will reduce its offensive armaments below the level of 1,550 warheads stipulated in the New START treaty to 1,100-1,300 warheads in order to return to 1,550 as a result of the large-scale renovation of its strategic equipment.
Maj. Gen. Vladimir Dvorkin of the Russian Academy of Sciences’ Institute of World Economy and International Relations (the former head of the Defense Ministry’s 4th Central Research Institute in charge of scientific and engineering support for the strategic forces) quipped at an international seminar last year that Russia would have to actively build new missiles in order to participate in nuclear disarmament in accordance with the New START ceilings.

But it will be difficult to balance the manufacture of Bulavas relative to Yars missiles. Both are produced by the same Votkinsky Plant in Udmurtia, which is also the sole manufacturer of the tactical Iskander missiles that are badly needed by the Land Forces.

The recommended remedies include expanding the scale of production or at least transferring the manufacture of Iskanders elsewhere. But each option will take time and it will be difficult to build up the output of solid-fuel strategic missiles even if implementation begins immediately.
The situation being what it is, the most active existing part of the naval Strategic Nuclear Forces (667BDRM-class submarines with R-29RMU Sineva missiles) emerges as the crucial element in the effort to maintain the strategic balance of power.

This is why the reaction to the Yekaterinburg fire was so pained. At one stroke this country has lost, even if temporarily, 16 percent of its submarine-based nuclear warheads. The upcoming commissioning of the Yury Dolgoruky will at best serve as a stopgap, halting the downward trend in Russia’s Strategic Nuclear Forces.