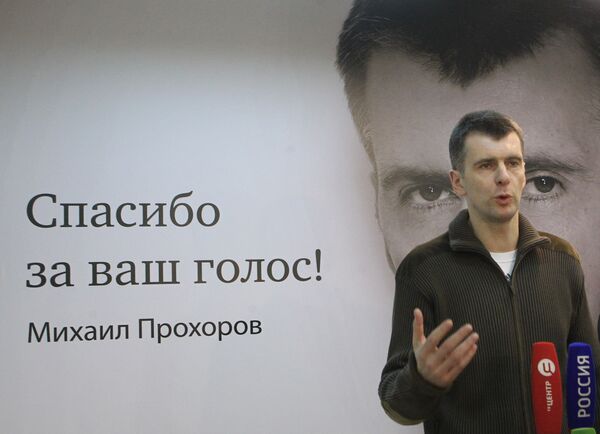 © RIA Novosti . Vladimir Fedorenko
/
Go to the mediabank
Subscribe
International
India
Africa
Russian billionaire Mikhail Prokhorov said on Friday he had collected the two million signatures required to get him registered as an independent presidential candidate for the March 4 elections.

Russian billionaire Mikhail Prokhorov said on Friday he had collected the two million signatures required to get him registered as an independent presidential candidate for the March 4 elections.

“I’ve collected over two million signatures. Thank you. You helped me with that,” the 46-year-old, whose fortune is estimated at $18 billion, said at a meeting with voters on Friday, adding that he planned to hand in all the signatures early next week.

Independent candidates must submit the signatures to the Central Election Commission by January 18.

Prokhorov, who owns a majority stake in the New Jersey Nets, said he was ready to unite democratic and liberal forces around his election platform.

“I am ready to unite all democratic forces, but I must specify – we must unite around a concrete program,” he said, adding that he would present the complete version of his program next week.

Earlier on Friday, former Finance Minister Alexei Kudrin said in his Twitter blog that he was also working to unite democratic and liberal forces. Kudrin resigned last September after getting into a spat with President Dmitry Medvedev,

Although his ratings are still high, the popularity of the presidential frontrunner, Vladimir Putin, was seriously dented by countrywide protests against alleged fraud in the December 4 parliamentary elections. But critics have said the opposition lacks unity and a strong leader.

In June, Prokhorov was elected leader of the Right Cause pro-business political party. In his speeches, he was critical of the ruling Medvedev-Putin tandem and eventually quit the party in September, saying it was a Kremlin puppet.

Apart from Prokhorov, other independent candidates for the presidency at the moment are Grigory Yavlinsky, founder of the Yabloko party, former Vladivostok Mayor Viktor Cherepkov, Irkutsk Governor Dmitry Mezentsev, public figure from the Urals Rinat Khamiyev and leader of the unregistered Volya party Svetlana Peunova.