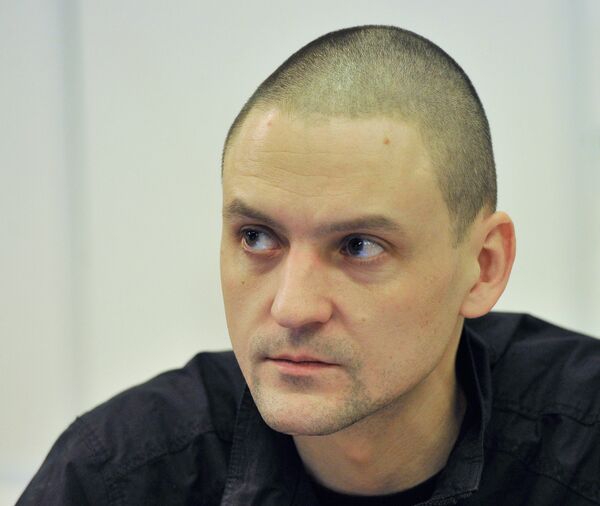 The leader of the Leftist Front movement was arrested on December 4 over the fact that he has not served the full term of his previous administrative arrest and escaped from a hospital. Udaltsov's 15-day detention term was extended on December 25 by another 10 days.

While in detention, Udaltsov went on a hunger strike, his health deteriorated and he spent the 10 days of his second arrest in hospital.

"Udaltsov's penalty was justified. Taking into account that he was held in hospital under police supervision, his arrest was served in full," the judge said.

The defense requested the court to cancel the magistrate's verdict as illegal and unfounded.

Udaltsov's lawyer Violetta Volkova said his actions did not constitute a legally defined crime, his constitutional rights were violated during the arrest, protocols contained numerous violations and the magistrate who heard the case gave a wrong interpretation to the facts.

Another lawyer, Karina Moskalenko said the opposition leader "fell a victim to the Russian legislation" and his detention violated at least three provisions of the European Convention for Human rights - the right for fair trial, the right to express opinion and the ban on illegal arrest.

The court, however, rejected all requests.

"The court considers that Udaltsov called on citizens to take part in a protest, he disrupted traffic and also swore and resisted arrest. Therefore, the magistrate gave a correct evaluation of Udaltsov's actions and his guilt... is proved by testimony of police officers who had no grounds for criminating the detainee," the judge said.

Udaltsov did not attend the court session citing poor health.