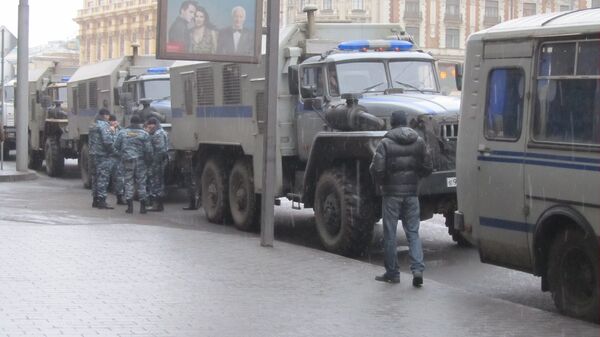 Moscow police detained about 20 people on Triumfalnaya Square on Saturday evening at an opposition protest that began at 6:00 p.m., a RIA Novosti correspondent reported from the scene.

Police later said "approximately 60" people were detained. They estimated the total number of protesters at 200 plus 100 accompanying journalists and bloggers.

Two of the detainees wore white ribbons, the symbol of recent mass demonstrations against vote fraud. Police detained anyone who was carrying a placard or giving an interview to media correspondents, of whom several dozen were present.

Other protesters continued filtering into the square after the first arrests, although they were outnumbered by journalists.

A number of protesters lined up together to reveal that the letters marked on their shirts in masking tape spelled: “Freedom for Udaltsov,” referring to the hunger-striking opposition leader who has been in detention almost continuously since being arrested on December 4, the day of disputed parliamentary elections.

Firebrand writer and activist Eduard Limonov, the leader of the Other Russia movement, was one of those detained on Saturday. At the Strategy-31 protest one year ago, Limonov was arrested and spent 14 days in jail for hooliganism.

Meanwhile, a policeman with a megaphone had an odd warning for would-be protesters: "Please do not gather together. No action at this spot today has been sanctioned by the Moscow mayor's office. Go to the place where you will see in the new year. Happy New Year everyone!"

About an hour before the protest began, police had parked 30-40 buses and trucks around the square and closed off pedestrian access.

Triumfalnaya is the regular venue for unsanctioned Strategy-31 protests held on the 31st day of a month to affirm Article 31 of the Constitution, which guarantees freedom of assembly.

This year Nemtsov attended the Strategy-31 protest in Nizhny Novgorod. He was not detained.

Police in St. Petersburg detained about 10 people at a Strategy-31 protest held at Gostiny Dvor.