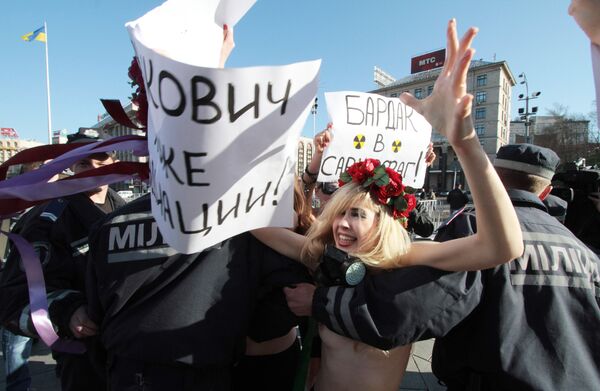 The semi-naked activists, Inna Shevchenko, Oksana Shachko and Alexandra Nemchinova gathered in front of the Minsk KGB headquarters on Monday, marking the one-year anniversary of a crackdown on the opposition that followed protests against the reelection of President Alexander Lukashenko. Soon after the protests, the women disappeared.

Gutsol said the activists were found on Tuesday in a forest in the Gomelsky district of Belarus after one of the women finally managed to get in touch with her. They claim the police subjected them to humiliating treatment.

“They were beaten up and doused with oil, they were threatened with being set on fire and their hair was hacked off with a knife,” Gutsol told RIA Novosti, adding that the women also had their documents seized.

Femen said earlier in its Livejournal blog that the activists managed to elude police for a time, but were detained on Monday night at the Minsk railway station. They were blindfolded and put on a bus that proceeded to drive all night long.

The Ukrainian Embassy in Belarus has been notified, she said. Embassy personnel will collect the activists soon and organize their trip back to Ukraine.

Gutsol had earlier blamed the Belarusian security services for their disappearance.

Spokespersons for both the Belarusian KGB and the Interior Ministry refused to comment.

Besides the activists, the Belarusian police also arrested on Monday the Femen camerawoman, Australian journalist Kitti Green, but later in the day she was deported to the Lithuanian capital of Vilnius.

Femen’s trademark topless protests have been used on a number of occasions to raise public awareness on various domestic and international issues. Most of the activists are university students.

Femen was protesting last year’s violent crackdown on the opposition in Minsk, when hundreds of people were detained during protests that broke out following presidential elections that gave Lukashenko almost 80 percent of the vote.

The opposition had said the polls were rigged. International election observers were also critical.