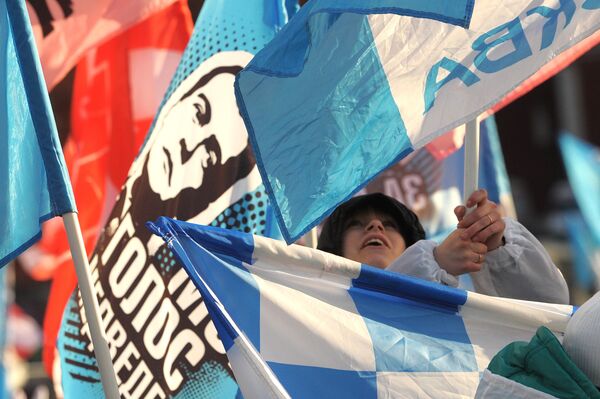 © RIA Novosti . Grigory Sysoev
/
Go to the photo bank
Subscribe
More than 25,000 supporters of President Dmitry Medvedev and Prime Minister Vladimir Putin gathered just outside the Kremlin on Monday in response to the biggest opposition demonstration in Moscow in years, police said.

More than 25,000 supporters of President Dmitry Medvedev and Prime Minister Vladimir Putin gathered just outside the Kremlin on Monday in response to the biggest opposition demonstration in Moscow in years, police said.

Members of the country’s pro-Kremlin youth movements chanted pro-government slogans and brandished banners including "We PUT IN our Votes!", "We have voted! We have won!"

Popular blogger Rustem Adagamov uploaded photos of the rally on Twitter, claiming there were fewer than 25,000 people there.

The pro-Kremlin demo comes two days after the biggest anti-government rally since the fall of communism.

Tens of thousands of people gathered in downtown Bolotnaya Square on Saturday to condemn alleged vote-rigging in favor of Putin’s ruling United Russia party in the December 4 parliamentary election and demand a re-run. Smaller rallies were also held in St. Petersburg and dozens of other cities.

United Russia managed to hang onto its parliamentary majority but opponents claim its real figures were much lower.

The party denied the rally was in response to Saturday's protest, saying it was to celebrate Russia’s Constitution Day.

“This meeting was planned long before the rally at Bolotnaya Square, as part of the Consitution Day celebrations,” senior party member Andrei Vorobyov said.

In a Facebook post on Sunday night, President Medvedev promised to investigate reports of fraud but said he did not agree with “the slogans or statements heard at the rallies.”

Medvedev’s update drew thousands of comments, with many users asking which slogan the president did not agree with.

“So are you against fair elections?” writers asked.