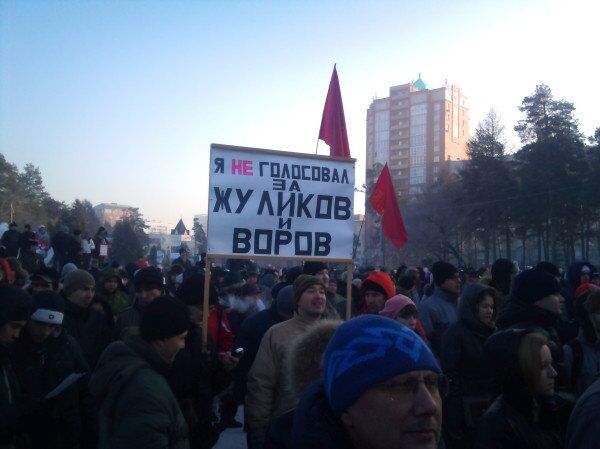 Voters took to the streets Saturday across Russia to protest elections they charge were rigged in favor of Vladimir Putin’s United Russia party, a mass demonstration of public anger not seen in years and a critical test for the country’s leadership.

Voters took to the streets Saturday across Russia to protest elections they charge were rigged in favor of Vladimir Putin’s United Russia party, a mass demonstration of public anger not seen in years and a critical test for the country’s leadership.

The rolling, nationwide demonstrations came a day after Russian election authorities announced the final official results of legislative elections of December 4, giving United Russia 238 seats in the 450-seat State Duma with just under 50 percent of the popular vote.

Around 1,000 people rallied in the southern Siberian city of Barnaul while smaller crowds numbering in the hundreds turned out in the cities of Krasnoyarsk, Vladivostok, Chita and Khabarovsk in eastern Russia, RIA Novosti correspondents reported from those cities.

The largest crowd however was expected in Moscow, where city officials gave permission for several demonstrations including one by those angry over the results of the elections for up to 30,000 people. A demonstration was also planned for Russia's second largest city of St. Petersburg.

According to the latest police reports, between 20,000 and 25,000 of the expected 30,000 protesters have so far gathered at the venue in downtown Moscow.

The co-chairman of the Party of People's Freedom, Vladimir Ryzhkov, announced from the stage in downtown Moscow that 40,000 people have gathered to protest with another 10,000 from Revolution Square making their way to the main venue.

A RIA Novosti correspondent said the crowd has begun chanting "Putin Out!"

Security was tight in the Russian capital, where several hundred people had gathered on a square near the Kremlin and planned to make their way to a different location further from the center of the city where the largest demonstration was to take place.

Prime Minister Vladimir Putin said ahead of the demonstrations that all Russians had the right to assemble and express their political views publicly, but warned that security forces would use “all legal methods” to maintain law and order.

The December 4 vote polarized Russian society, with Putin and supporters describing the outcome as a “real” reflection of the mood in the country while others – both Russian political activists and international observers – saying the vote was slanted in United Russia’s favor.

Although United Russia won nearly half the popular vote, the election was a huge setback for the “party of power” and Putin directly accused the United States of seeking to stir up trouble in Russian politics after U.S. Secretary of State Hillary Clinton criticized the conduct of the vote.

"People in our country don't want the situation in Russia to develop like it did in Kyrgyzstan and, not so long ago, in Ukraine," Putin said Thursday. "Nobody wants chaos."

He was referring to popular uprisings, referred to in Russia as “color revolutions,” that led to the downfall of leaders in both former Soviet republics and another, Georgia, which he did not mention.

Meanwhile, the Communist Party announced in a statement posted on its website Saturday that it does not recognize the results of the elections in many Russian regions, including the North Caucasus republics and the largest cities of Moscow and St. Petersburg, citing massive violations there.

“We consider the vote illegitimate from the moral and political points of view,” the party’s presidium said in the statement.

Another political party, the liberal Yabloko party, separately vowed to contest the results of the December 4 elections in court.

Disgruntlement over the polls saw some 5,000 protesters rally in central Moscow on Monday. Demonstrations continued across Russia, although on a smaller scale, for the next two evenings.

Some 1,000 people have so far been detained in protests, police said, including influential blogger and opposition activist Alexei Navalny.

Navalny, along with another opposition leader, Ilya Yashin, was jailed for 15 days on Tuesday as a result of their participation in Monday’s unsanctioned protest.

The protests have been largely ignored by state-run televisions channels, which chose instead to broadcast images of United Russia supporters parading near the Kremlin. Demonstrations have been organized via Facebook and Vkontakte, a popular internet social networking site. Vkontakte’s founder, Pavel Durov, said this week he had refused a request by the security services to deactivate accounts belonging to opposition groups.