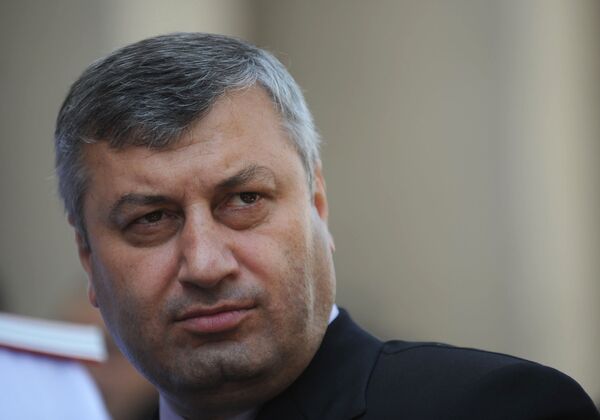 South Ossetian President Eduard Kokoity has agreed to step down as part of a compromise agreement with opposition leader and former presidential candidate Alla Dzhioyeva, a source in the South Ossetian presidential administration said.

The situation in restive South Ossetia, a self-proclaimed republic in Georgia, heated up after Dzhioyeva won the November 27 runoff against a Kremlin-backed rival, according to preliminary results. Two days later, the republic's Supreme Court annulled the voting results, citing violations.

Supporters of Dzhioyeva, who has declared herself president despite the court’s ruling, have been holding demonstrations on the main square of the republic’s capital, Tskhinvali, ever since.

In exchange for Kokoity’s resignation, which is expected to be announced later on Saturday, Dzhioyeva has agreed to urge her supporters to go home.

Prime Minister Vadim Brovtsev has been appointed acting president to run the republic until new presidential elections, which will be held on March 25.

In line with the agreement, signed late on Friday following consultations with Russian presidential administration official Sergei Vinokurov, Dzhioyeva will be allowed to run in the polls.

Dzhioyeva has been banned from running in the new elections by a Supreme Court ruling.

The agreement provides for the dismissal of Supreme Court chairman Atsmaz Bichenov, as well as South Ossetian Prosecutor General Taimuraz Khugayev and his deputy Eldar Kokoyev.

Dzhioyeva told journalists following the signing of the agreement that she was ready to drop her presidential bid in favor of a new “decent” candidate, a “political heavyweight.”