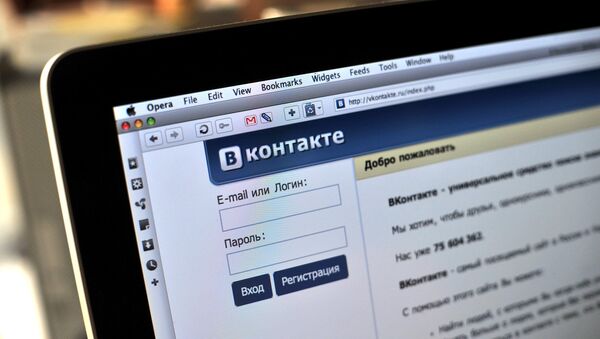 Russia’s most popular social network was asked by the country’s domestic security agency to deactivate accounts of groups that contained posts calling for street protests, but the company rejected the request, a spokesman said Thursday.

Russia’s most popular social network was asked by the country’s domestic security agency to deactivate accounts of groups that contained posts calling for street protests, but the company rejected the request, a spokesman said Thursday.

“We received a request from the FSB to stop the activity of Vkontakte groups calling for riots and a revolution,” Vladislav Tsyplukhin, spokesman for social network VKontakte, wrote on his corporate web page.

“We explained in response that we have been following those groups and cannot block them as a whole just because some individual users have called for violence,” Tsyplukhin wrote.

The accounts of specific users who have explicitly called for public disorder however are being blocked by the company, he said, adding that there had not been any excessive “pressure, threats or rudeness” from the Federal Security Service (FSB) in its requests.

Contacted by RIA Novosti, the FSB declined to provide comment on the reported request.

Tsyplukhin’s comments came after the administrator of popular Russian anti-corruption website RosPil published a report on Thursday in which he quoted Vkontakte founder Pavel Durov as saying that the FSB had asked him to shut down “opposition” accounts.

The report, which came amid ongoing protests against the results of Sunday’s parliamentary vote, went viral over Russian internet blogs and online media.

“Over the past few days, the FSB has been asking us to block opposition groups, including yours,” Durov was quoted as informing the administrator of the RosPil website, which is operated by controversial Russian anti-corruption activist Alexei Navalny.

“We don’t do this on principle. I don’t know how it can affect us, but we are sticking to our position,” Durov wrote in his message to the administrator, adding: “Vkontakte is a 100-percent apolitical company. We support neither the authorities nor the opposition, and no particular political party.”

Representatives of other Russian social networks said they had not been contacted by the FSB.

As of Thursday, more than10 accounts have been registered on Vkontakte where users discuss the alleged fraud during Sunday’s elections, in which the pro-Kremlin United Russia party gained around 50 percent of the vote, and preparations for a protests rally to be held in Moscow on Saturday.

Similar rallies have already taken place in Moscow and St. Petersburg earlier this week, including protests on Monday and Tuesday in central Moscow, in which several thousand people took part.

The Russian authorities have declared the elections fair and democratic, while the OSCE pointed to "flagrant procedural violations" during the polls, including cases of ballot-stuffing, "a convergence of the state and the governing party," limited political competition and a lack of fairness.