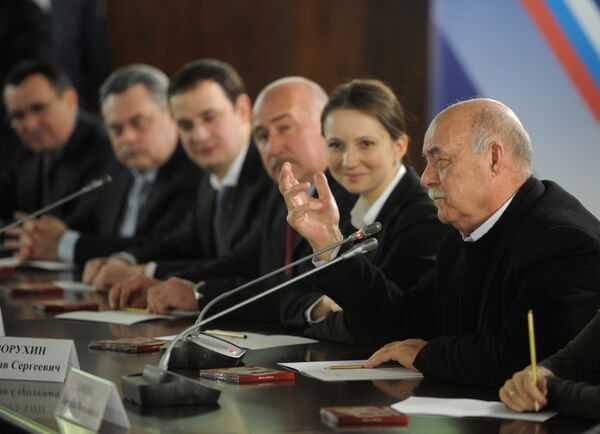 Speaking to supporters on Thursday, Putin said he wants to use an amorphous group he launched in May, the All-Russia People's Front, as the basis of his campaign.

“I would like to create my [presidential campaign headquarters] at the offices of the All-Russia People’s Front, an organization that is above parties, that unites all the people of the Russian Federation,” the prime minister said.

Govorukin, a veteran director and a one-time dissident, delivered a passionate eulogy to “Vladimir Vladimirovich” at a glitzy United Russia congress last month.

The former KGB agent appears to be trying to distance himself from his United Russia party, which won Sunday’s parliamentary election but with a much reduced majority.

Putin said he had “warm feelings” for the party which he set up in the early 2000s but added that he wanted a quarter of its fraction in the lower house to be represented by “non-party members of the All-Russia People’s Front.”

Earlier this week, the prime minister’s spokesman, Dmitry Peskov, told BBC Russia that Putin “had never been directly linked to the party.”

There have been rallies in Moscow and other cities against alleged fraud in Sunday’s parliamentary vote, most of it in favor of United Russia.

Observers from the Organization for Security and Co-operation in Europe (OSCE) had earlier said the election was “slanted in favor of United Russia.”

More than 600 people have been arrested in three days of protests and the biggest rally yet is scheduled for Saturday, with tens of thousands of people signing up to it on social networks such as Facebook and Vkontakte.

Former Soviet leader Mikhail Gorbachev on Wednesday called for a re-run of the election.

“The country’s leaders must admit there were numerous falsifications and rigging, the results do not reflect the people’s will,” he told the Ekho Moskvy radio station.