U.S. says will continue support for peaceful protests, including in Russia 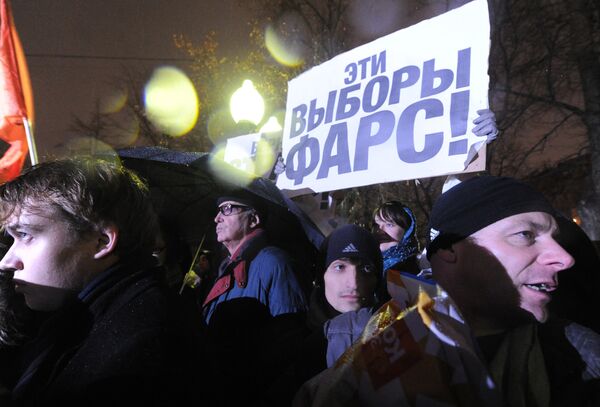 The United States will continue to support the rights of citizens for peaceful protests everywhere in the world, including Russia, a Department of State deputy spokesperson said.

The United States will continue to support the rights of citizens for peaceful protests everywhere in the world, including Russia, a Department of State deputy spokesperson said.

"And again, I think as we've said before, we would obviously support the rights of anyone to peaceful protest - emphasis on peaceful - anywhere in the world. And - well, Russia's no different," Deputy Spokesperson Mark Toner said.

According to official reports at least 300 people were detained when a crowd of some 5,000 rallied in central Moscow on Monday against alleged poll violations at Sunday's parliamentary elections.

"We have seen that hundreds were arrested, and there is apparently a prominent blogger who remains in detention," the deputy spokesperson said. "We've expressed our concerns about the treatment of all those being arrested who were exercising their rights to peaceful protest."

Toner said that U.S. official, including Secretary of State Hillary Clinton have already delivered their remarks on the issue.

"Secretary Clinton was very clear about raising some of the concerns with the conduct of the recent elections," the State Department deputy spokesperson said. "She said that Russian voters deserve, I think, a full investigation of electoral fraud and manipulation."

He also called on Russia to follow recommendations of international observers, including an OSCE report which is to be finalized in the coming weeks.

"We look to the Russian Government to address some of those recommendations, as we believe it's incumbent on any government to ensure a democratic, free, and transparent process for its people," the U.S. official said.

The Russian Foreign Ministry said on Tuesday comments by senior White House officials about Russian parliamentary elections were "unacceptable," including Clinton's statements that Sunday's polls in Russia were neither free nor fair.

"Comments by the U.S. Secretary of State Hillary Clinton about the Russian parliamentary elections, as well as those of other representatives of the White House and the U.S. Department of State are unacceptable," the Russian Foreign Ministry said in a statement on Tuesday.

International observers from the Council of Europe and the Organization for Security and Co-operation in Europe noted that the election preparations were technically "well-administered across a vast territory," but marked by "flagrant procedural violations," including cases of ballot-stuffing, "a convergence of the state and the governing party," limited political competition and a lack of fairness.