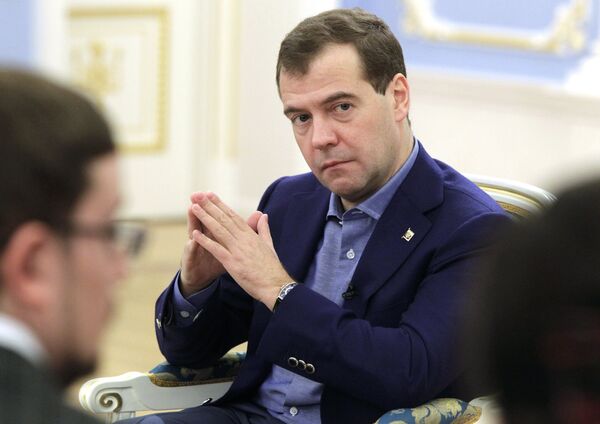 The NATO secretary general said the Russian president's recent remarks about Russia's countermeasures against the European missile defense system could be influenced by the parliamentary elections.

The NATO secretary general said the Russian president's recent remarks about Russia's countermeasures against the European missile defense system could be influenced by the parliamentary elections.

The statement is contradictory to remarks by Russian President Dmitry Medvedev, who said on December 1 that his plans to put offensive weapon systems on Russia's borders to counter a planned European missile shield were not electoral rhetoric but a forced measure.

"It's a well-known fact that in democracies you have heated debates during electoral campaigns and, of course, I can't exclude the possibility that recent statements are also influenced by the electoral mood in Russia," NATO Secretary General Anders Fogh Rasmussen told reporters after meeting with foreign ministers of NATO member states.

"But of course we have to take presidential statements seriously," Rasmussen went on. "And that's what I do by stressing that I don't think that such statements are in full accordance with what we decided a year ago in Lisbon when we clearly stated that we want to develop a true strategic partnership between NATO and Russia."

He said that he was optimistic about the future of Russia-NATO missile defense talks and the forthcoming Russia-NATO summit in Chicago due in May 2012.

"I hope that we can reach an agreement at the Chicago Summit in May," Rasmussen said earlier in the day in his doorstep statement.

"It's a shared interest to protect our populations against a real missile threat, and it would definitely be waste of valuable money if Russia started to invest heavily in counter-measures against an artificial enemy that doesn't exist," he said.

Moscow is seeking written, legally binding guarantees that the shield will not be directed against it, Washington, however, has refused to put its verbal assurances in writing.

In his address to the nation on November 23, Medvedev said that if Moscow's participation in the European missile defense project fails, Russia would deploy Iskander tactical missiles in the Kaliningrad Region and halt its disarmament and arms control efforts, including participation in the new strategic arms reduction treaty with the United States.