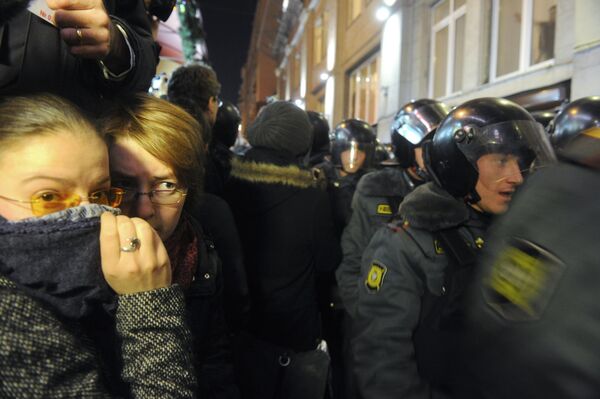 © RIA Novosti . Grigoriy Sysoyev
/
Go to the photo bank
Subscribe
Some 300 people were detained on Tuesday in Moscow during a second evening of protests over alleged mass electoral fraud in favor of Prime Minister Vladimir Putin's United Russia party at this weekend's parliamentary polls

Some 300 people were detained on Tuesday in Moscow, police said, during a second evening of protests over alleged mass electoral fraud in favor of Prime Minister Vladimir Putin's United Russia party at this weekend's parliamentary polls.

"We are going to keep coming out to demonstrate until they annul the results of the polls," one of the participants, Moscow student Pavel Malinovsky, said. "United Russia stole the elections."

The illegal demonstration was attended by around 1,000 people and took place at the city's Triumfalnaya Square, a short distance from the Kremlin. The rally came in the aftermath of a much larger protest on Monday, which drew an estimated crowd of up to 6,000.

The opposition protesters faced off against some 2,000 members of pro-Kremlin youth movements and a large contingent of Omon riot police under the gaze of a statue of Soviet poet Vladimir Mayakovsky.

The protest was at times a surreal affair, as early evening pedestrians and theatergoers mingled with groups of angry demonstrators from both sides, shouting competing slogans at each other.

"Russia without Putin!" chanted the opposition crowd, retreating from time to time as Omon officers charged in to make arrests, while United Russia’s supporters shouted: “Yes to the elections! Yes to Putin!”

Former deputy prime minister and opposition leader Boris Nemtsov was among those detained by police as tempers flared. Sergei Mitrokhin, a senior member of the opposition Yabloko party, was also arrested. Both men were later released.

Sunday's parliamentary elections were marred by widespread allegations of poll procedure in favor of United Russia, with dozens of video clips appearing to show election fraud uploaded onto the Internet.

President Dmitry Medvedev, meeting the election commission chief outside Moscow, said charges of voting violations must be investigated. But he added that video material posted on social networks did not constitute “incontestable” proof of cheating.

International observers and the United States also criticized the elections, which saw United Russia's worst ever nationwide performance. The party did, however, manage to hang onto its majority.

The dueling demonstrations seemed to catch some local residents off guard.

"I came down here to see what was going on after hearing about last night's trouble," mother-of-three Lyudmila Shatokina said. "I saw all the soldiers and police on the street and asked them 'Are we at war, or what’?"

"The police are acting against the people, I can see that. The Nashi members, they are just poor kids bussed in from the regions. Promised a free trip to Moscow in exchange for supporting United Russia."

Although numbers fell far short of Monday's protest, which had been given the green light by the authorities, the crowd was still a significant increase on usual opposition protests in Moscow.

"I have a good job, a good life, but I'm fed up of being treated like an idiot," office manager Dmitry Pavlovsky said. "And I'm doing this for my children, so they can live in a fairer country."

Some 200 people were also detained in a similar protest in the northern Russian city of St. Petersburg.