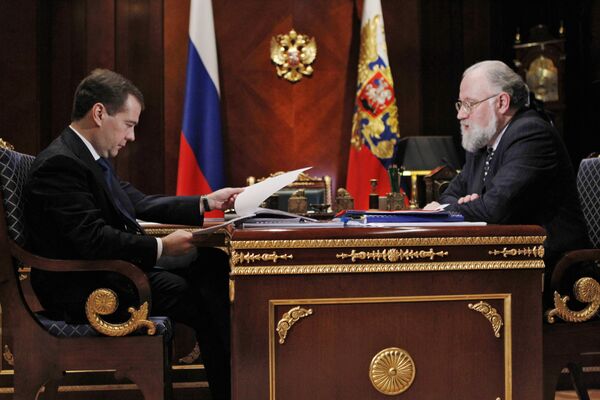 Complaints of irregularities in Russia’s recent legislative elections need to be investigated but videos purporting to show fraud are not incontestable proof of cheating, President Dmitry Medvedev said Tuesday.

Complaints of irregularities in Russia’s recent legislative elections need to be investigated but videos purporting to show fraud are not incontestable proof of cheating, President Dmitry Medvedev said Tuesday.

“As is customary following release of voting results, there must naturally be a judgment made on all violations” claimed during the vote, Medvedev said during a meeting with the head of the Russian central election commission, Vladimir Churov.

However the appearance of videos on various internet websites and social networks claiming to show evidence of vote-tampering does not in itself provide “incontestable” evidence of wrongdoing, the Russian president said.

“It is wrong to draw conclusions about whether the elections were clean or dirty on the basis of such evidence,” Medvedev stated. “This is not entirely fair.”

His comments came amid protests in Moscow by opponents and supporters of the United Russia party which has dominated Russian politics for years and which recently nominated Prime Minister Vladimir Putin as its candidate in presidential elections next March.

Opponents of the party claim the elections on Sunday to the State Duma, the lower house of parliament, were marred by massive fraud that resulted in excessive support showings for United Russia. They have backed their accusations with videos, most shot on mobile phones and posted on websites and they claim these prove large-scale wrongdoing throughout the vote.

Party supporters have acknowledged there were irregularities by “over-zealous” supporters but not in sufficient numbers to have made any meaningful difference to the outcome and have asserted that the election was fair overall.