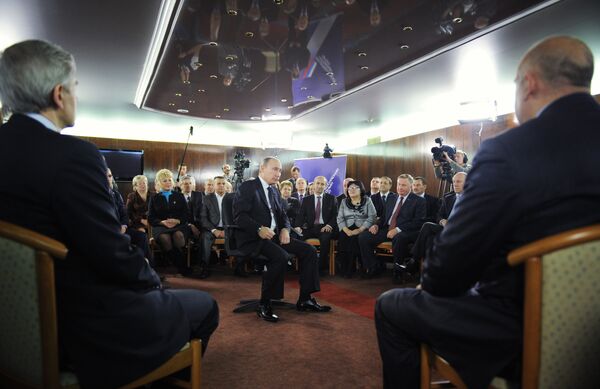 Putin, who is expected to return to the Kremlin next year, said the first step, a reshuffle of the lower house, had been achieved after Sunday’s parliamentary elections.

The elections saw the ruling United Russia party win 49.3 percent of the vote, some 238 seats in the State Duma. This was fewer than four years ago, when the party won 315 seats.

The other parties that took part in the elections were the Communist Party, which won 19.2 percent, followed by A Just Russia with 13.25 percent and the Liberal Democrats with 12 percent.

“The next stage, after the presidential elections, is the formation of a cabinet. Of course, the government will be seriously changed and a change of the gubernatorial corps will also follow,” the premier said.

However, Putin urged caution over personnel policy, saying wholesale dismissals would be wrong. “The personnel backbone should not be destroyed; professionals should not be swept out,” he said.

President Dmitry Medvedev said on Monday that the governors of regions that showed poor results for the ruling United Russia party at Sunday’s parliamentary elections will face “organizational conclusions,” which means they could be dismissed.

According to preliminary data, United Russia gained less than 30 percent in the Yaroslavl Region and less than 35 percent in 13 other regions, including Karelia and Arkhangelsk, Vologda, Irkutsk, Kostroma, Moscow, Leningrad, Murmansk, Novosibirsk and Sverdlovsk regions, as well as in St. Petersburg.

Putin also said Russia does not need “a show” in parliament.

“We need a professional parliament,” the premier said. “Those who want to watch television of parliamentarians brawling and pulling each other’s hair, that would probably be an interesting show.”

“But if someone wants to watch a show, they’re better off going to the circus, theater or movies,” Putin said.

“The more people laugh at what is going on in parliament, the sadder it will be for us in the long run,” he said, recalling the frequent brawls in the Ukrainian parliament.

This seemed to be a response to Medvedev’s comments on Monday. At a meeting with his supporters on December 5, Medvedev agreed that party congresses are too dull and urged making them “livelier.”

“Around the world, [election] results are a show,” he said. “We need to learn this. Let us hold congresses in a livelier manner as well.”