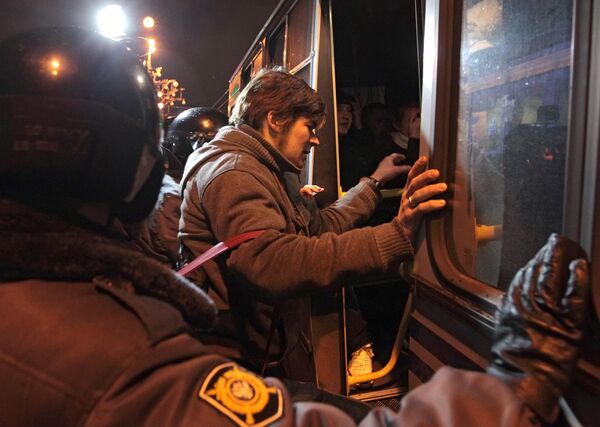 Thousands of people gathered in downtown Moscow on Monday to protest against alleged election fraud at this weekend's parliamentary polls, which saw a big slump in support for Prime Minister Vladimir Putin's United Russia party.

Thousands of people gathered in downtown Moscow on Monday to protest against alleged election fraud at this weekend's parliamentary polls, which saw a big slump in support for Prime Minister Vladimir Putin's United Russia party.

The rally was the largest opposition protest for years in Moscow and comes amid rising disgruntlement with the authorities.

Crowd numbers were estimated at “around 5,000” by a RIA Novosti correspondent at the scene. Police put the crowd at 2,000.

There were some 300 arrests as the crowd gathered at Moscow’s Chistye Prudy region. Influential blogger and anti-graft activist Alexei Navalny was among those detained.

A number of protestors called on the police to "be with the people." Other carried "Down with the Party of Swindlers and Thieves!" banners, a reference to United Russia's popular, unofficial nickname.

A number of protestors were also arrested near the Kremlin.

Sunday’s elections were marred by widespread allegations of poll procedure in favor of United Russia, with dozens of clips appearing to show election fraud uploaded onto the Internet.

International observers from the Council of Europe and the Organization for Security and Co-operation in Europe reported "flagrant procedural violations," including cases of ballot-stuffing.

The polls saw the ruling United Russia party suffer its worst ever nationwide result. While the party of Prime Minster Vladimir Putin and President Dmitry Medvedev managed to hold onto a simple parliamentary majority, its share of the vote slumped from 64% to just under 50%.

The protest is continuing at Lubyanka, near the headquarters of the Federal Security Service (FSB), although crowd numbers have dropped considerably.

Some 120 poeple were also detained at a protest in St. Petersburg.