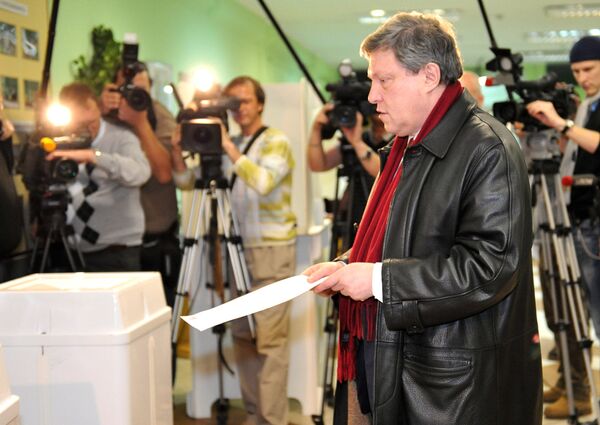 © RIA Novosti . Vladimir Pesnya
/
Go to the photo bank
Subscribe
Grigory Yavlinsky, the leader of the Yabloko opposition party’s electoral list, said his party will contest the results of Sunday’s parliamentary elections that saw the ruling United Russia party balancing on the verge of the 50-percent mark.

Grigory Yavlinsky, the leader of the Yabloko opposition party’s electoral list, said his party will contest the results of Sunday’s parliamentary elections that saw the ruling United Russia party balancing on the verge of the 50-percent mark.

Yabloko chairman Sergei Mitrokhin told journalists the party disagreed with the preliminary results, which gave Yabloko a mere 3.16 percent, far from the 7-percent election threshold or the five-percent mark that would give it one seat in the State Duma.

“Despite gross violations throughout the country, despite ballot stuffing, falsifications, we see that on the whole, Yabloko’s results are rather positive,” he said, however.

The elections were punctuated by thousands of claims of violations both from independent observers and the government, with the Interior Ministry alone announcing it had received and would investigate more than 1,000 complaints of irregularities.

Now that Yabloko has cleared the 3-percent mark, it will not have to pay for airtime on television during next elections, in line with the Russian law.

In the U.K., there were 2,208 Russians, and 41 percent of them voted for Yabloko, 19.7 percent for the Communist Party, followed by the moderate A Just Russia with 15.8 percent, United Russia with 10.6 percent and the nationalist Liberal Democrats (LDPR) with 7.2 percent.

On the whole, during the night, United Russia has been hovering around half of the vote as ballots were being counted. At some points it had over 50 percent, balancing around the mark, going down and back again. A Just Russia party got 13.13 percent and LDPR, 11.67 percent, according to preliminary results. Patriots of Russia and Right Cause are even further behind, with 0.96 and 0.58 percent respectively.

Voter turnout was about 60 percent.

Earlier United Russia was able to impose its will on the national legislature with or without the support of other political parties. Now, in order to change the Constitution, it will have to seek coalition agreements with other parties.

Meanwhile, one of the outsiders, Right Cause, also said it will contest the election results. The party said it disagreed with the results in St. Petersburg and the Moscow Region, adding that gross violations took place in local election commissions.

“We are sure that our votes were simply stolen at many polling places of these regions,” acting party leader Andrei Dunayev said. “We will investigate each case of violations and try to make it to regional legislative assemblies by all legal means.”