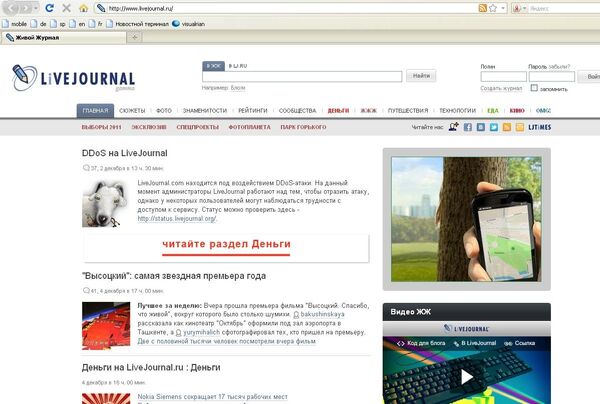 © Photo : http://www.livejournal.ru/
Subscribe
Popular Russian media websites, the major LiveJournal social network and the website of the country’s biggest independent election watchdog, were inaccessible in hacking attacks for several hours on Sunday in what their employees said was an attempt to jam information on parliamentary elections.

Popular Russian media websites, the major LiveJournal social network and the website of the country’s biggest independent election watchdog, were inaccessible in hacking attacks for several hours on Sunday in what their employees said was an attempt to jam information on parliamentary elections.

“The attack on the website on election day is apparently tied to an attempt to publish information about violations,” chief editor of the independent-minded Ekho Moskvy radio Aleksei Venediktov wrote in his Twitter blog.

Twitter and Facebook remained operational on Sunday and the attacked media organization moved their election coverage onto those platforms.

Russians vote on Sunday to elect the lower chamber of the parliament, the State Duma, in what is widely seen as a test of legitimacy of the upcoming presidential vote in March, which Prime Minister Vladimir Putin is set to win.

Websites of Forbes Russia, Bolshoi Gorod and New Times magazines, Slon.ru news portal, Golos election watchdog and its Kartanarusheniy.ru website that was supposed to map vote fraud were down throughout most of Sunday.

These media organizations and the watchdog have pledged to report voting violations from all over Russia live.

Independent and opposition media, as well as the LiveJournal social network that has become the main political discussion venue in Russia, are often subjected to hacking attacks, though the Sunday assault was the most concerted and broad. Law enforcement officials had not commented on it as of late Sunday afternoon.

In April 2011, President Dmitry Medvedev demanded police investigate the attacks that had paralyzed Livejournal for nearly two weeks in March, but the Interior Ministry dropped the case in August, saying the attacks do not qualify as a crime.