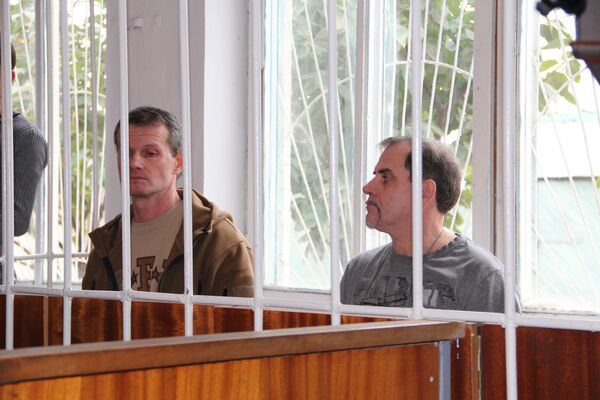 © RIA Novosti . Lidia Isamova
Subscribe
A court in Tajikistan has sentenced Russian pilot Vladimir Sadovnichy and Estonian Alexei Rudenko to eight and a half years in prison each for smuggling and border violations.

A court in Tajikistan has sentenced Russian pilot Vladimir Sadovnichy and Estonian Alexei Rudenko to eight and a half years in prison each for smuggling and border violations.

The two men were found guilty of both offenses as well as violating flight regulations. They had both denied the charges.

The Antonov An-72 transport aircraft they were flying when the offense was committed was also confiscated.

The pair were detained by Tajikistan's security service in March after landing at Kurgan-Tyube airfield with two aircraft, one of which was carrying a spare engine, which the court described as a "smuggled engine."

The aircraft, operated by Rolkan Investments, had departed from Kabul in Afghanistan were it had had been carrying out humanitarian relief work, bound for Moscow. After entering Tajikistan airspace it was ordered to return to Kabul by Tajikistan air traffic controllers. The pilots said they could not comply due to lack of fuel but landed at Kurgan-Tyube instead.

A Russian consular official in Tajikistan, Dmitry Kabayev, described the sentences as unfair and inhuman. "We will struggle for our citizen with all the means at our disposal," he said.

The Russian Foreign Ministry described the sentences as "extremely severe" and "politically charged," and said the case would harm Russian-Tajik relations.

The prosecutors in the case welcomed the outcome.

Cargo aircraft from the former Soviet Union have been the subject of much controversy in the last two decades, due to their high accident rate, and frequent involvement in smuggling of arms, narcotics and other contraband. They have, however, also been responsible for carrying massive amounts of aid into dangerous areas which may otherwise not have been carried by operators less willing to take risk for low fees.