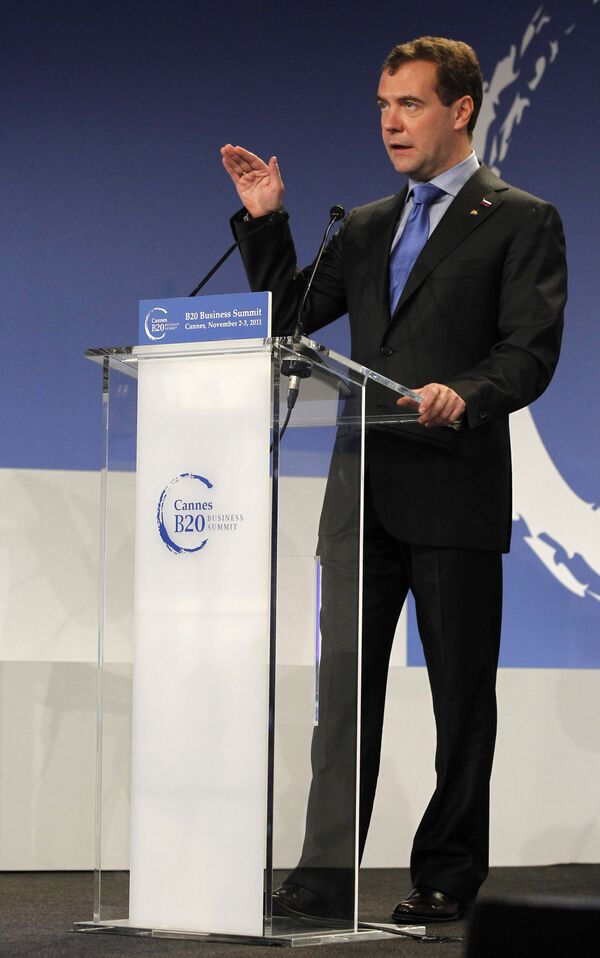 © RIA Novosti . Dmitry Astakhov
/
Go to the photo bank
Subscribe
Moscow is ready to accept the compromise on WTO accession proposed by Switzerland, which is mediating talks between Russia and Georgia, the Russian President Dmitry Medvedev said on Thursday.

Moscow is ready to accept the compromise on WTO accession proposed by Switzerland, which is mediating talks between Russia and Georgia, the Russian President Dmitry Medvedev said on Thursday.

Russia has endeavored to join the WTO since 1993 and needs to reach individual agreements with all 153 members of the WTO. The last remaining obstacle to its admission is Georgia, which has refused to give Russia the go-ahead since the two countries fought a brief war in August 2008.

Switzerland has sponsored the negotiations between the two countries, which severed diplomatic ties after Russia recognized two former Georgian republics of Abkhazia and South Ossetia as independent states.

"We are ready to accept compromise ideas on which we worked together with Switzerland,” Medvedev said.

Tbilisi’s main demand was to introduce international monitoring of cargoes on the border between Russia and Georgia’s former republics of Abkhazia and South Ossetia, which Russia recognized as independent states.

The Russian leader said he “fully confirmed” the information voiced earlier on Thursday by Russia’s chief WTO negotiator Maxim Medvedekov, who said Russia and Georgia have finally reached an agreement in the WTO talks.

But Medvedkov’s statement was rejected by Georgian Deputy Prime Minister Georgy Baramidze, who said on Thursday Russia “took a timeout” with Georgia.

Medvedev’s statement also echoes the announcement by Russian Deputy Foreign Minister Sergei Ryabkov, who said earlier on Thursday negotiations on Russia’s admission to the organization will be officially completed next week.

A WTO ministerial conference to consider Russia’s accession bid is expected to take place on December 15. If the bid is approved the accession documents will need to be ratified by the Russian parliament, and 30 days after ratification Russia will become a full-fledged member of the WTO.