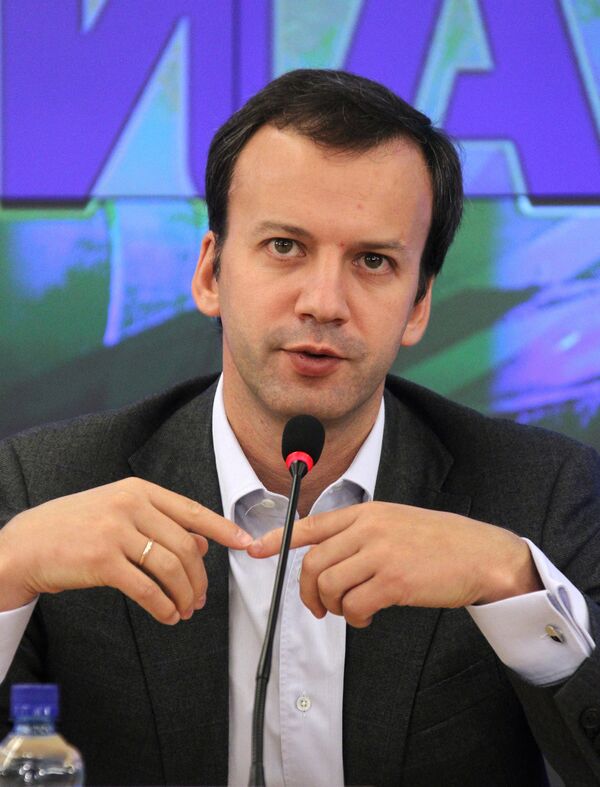 © RIA Novosti . Alexandr Natruskin
/
Go to the photo bank
Subscribe
Saving Europe is becoming something of a popular global trend. Arkady Dvorkovich, economic adviser to the Russian president, told a RIA Novosti briefing on Monday that Russia was ready to help stabilize the European economy via the IMF.

Saving Europe is becoming something of a popular global trend. Arkady Dvorkovich, economic adviser to the Russian president, told a RIA Novosti briefing on Monday that Russia was ready to help stabilize the European economy via the IMF. The government indicated it was ready to allocate up to $10 billion. It looks like Russia has followed China's lead, after China offered to join the European Financial Stability Facility (EFSF) - the bailout fund created to fight the debt crisis currently plaguing Europe. Why is Russia so keen to rush to Europe's aid, and how badly does Europe need Russia's money?

"Europe's continued stability matters to us," Dvorkovich told RIA Novosti. "Europe is our biggest trade and investment partner. If Europe is unstable, Russia's economy will also enter a phase of instability."

But will Russia's $10 billion make much of a difference in resolving the debt crisis? Europe certainly needs more money, from Russia, China, India or anyone who offers. But $10 billion is a drop in the ocean compared with the volume of funds being spent to cure Europe's ailments. "How can $10 billion make a difference when they are discussing programs costing over trillion euros?" said Bank of Moscow analyst Kirill Tremasov.

Dvorkovich repeatedly said there was "enough money" while explaining his optimism about the future of Europe's economy at the news briefing.

Experts believe that, by offering aid to Europe, Russia is more concerned with its own geopolitical ambitions than it is with Europe's recovery. According to Yury Danilov, director of the Stock Market Development Center foundation, the rest of the BRICS plan to take an active part in dealing with Europe's problems, so it is important that Russia keeps up with them.

"This is an issue of Russia's geopolitical role. The BRICS nations are rapidly augmenting their share of the global economy, while their role in global politics remains insignificant. Getting involved in instruments such as the EFSF and IMF might help restore this balance," Danilov said.

China seems to be the keenest to bridge this gap - the world's second largest economy, it certainly has ambitions of gaining commensurate political weight. This ambition could also be achieved by expanding its presence in international organizations that control financial flows.

China's growing role in the IMF and other financial groupings was one of the most discussed topics at the first G-20 summits, Danilov said. "China wants to influence the process and is generally geared toward dominance, not only in the markets but also when it comes to political instruments," said Yelena Matrosova, macroeconomic research director at BDO International.

China's motivation is clear. But does the Russian economy match up to its leaders' ambitions? Russia does not rank as one of the world's top ten economies, and its share of global GDP is barely above 2%. China accounts for 9%. And then there are immense structural differences between the two economies.

But there is something Russia and China do have in common: both have "superfluous" money. China has accumulated cash which can't be invested domestically because the Chinese economy is already suffering from overinvestment.

Russia also has reserves put aside for a rainy day. These funds won't be put to use anyway, Danilov said, careful not to suggest that Russia's economy doesn't need the money. The ineffective system of spending and oversight essentially devalues both government and individual investments. "Government investments don't offer a return due to high corruption levels, embezzlement and so on. It seems wiser to invest abroad, even state funds," Danilov said explaining the officials' rationale.

By sending financial aid to Europe, Russia is in fact placing its reserves in foreign currency-denominated instruments, while at the same time achieving its political ambitions.

But Tremasov also noted that Russia builds up these reserves in order to have saving, not turn a profit. "We view these rainy day funds as insurance against future economic crises, against plummeting oil prices. I don't think we should get carried away investing in risky European assets," he added. On the other hand, he said direct acquisition of Italian or Spanish bonds would pose the highest risk, while the IMF mediation must hedge risks to some extent. "This is an opportunity that can and must be considered," Tremasov concluded.