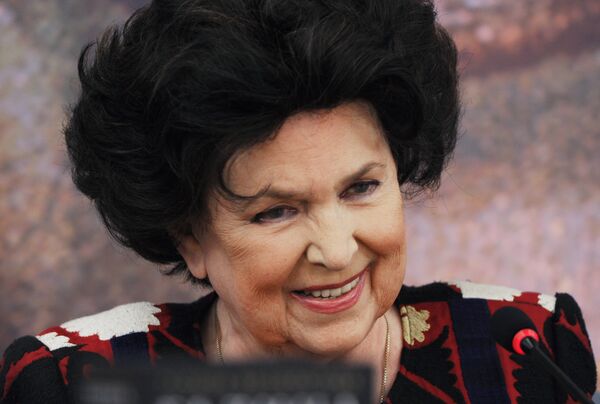 Vishnevskaya, a former leading Bolshoi Theater singer, and her late husband, renowned conductor and cello player Mstislav Rostropovich, gained global recognition for their art. Their foreign careers began after they were expelled from the Soviet Union for supporting dissident Alexander Solzhenitsyn in 1974.

“As an outstanding Russian singer, you have conquered the best stages of the planet and performed tens of solo parts that became the classics of the world’s music art,” Medvedev said in his message.

Born in 1926, Vishnevskaya began her opera career in the Leningrad (former St. Petersburg) Region opera and ballet theater in 1944, and joined the Bolshoi Theater of Moscow shortly afterward. She soon became the Bolshoi prima.

In 1955, Vishnevskaya married Rostropovich four days after their first meeting. Rostropovich, who died in 2007, was her third husband. During their stay abroad, both musicians were stripped of Soviet citizenship and all state awards for their assistance to disabled Russian emigrants, WWI veterans. But in 1990, the couple were allowed return to their homeland.

In 2002, Vishnevskaya became head of a newly built Opera Center in downtown Moscow. Since 2006, she has been chairing the jury of the Open International Competition of Opera Singers named after Vishnevskaya. She is also head of the Russian Singers’ Fair in Yekaterinburg, the Urals.

“It is important that you engage in important public activities today and devote substantial attention to training and guidance, and to preserving the priceless artistic legacy of Mstislav Rostropovich,” Putin said in his message.

Medvedev thanked Vishnevskaya for her painstaking efforts to “preserve and develop the rich traditions of the Russian opera school.”

“Talented young people from Russia and other countries consider it big honor to receive training at your Opera Center,” Medvedev said, also praising her charity activities.