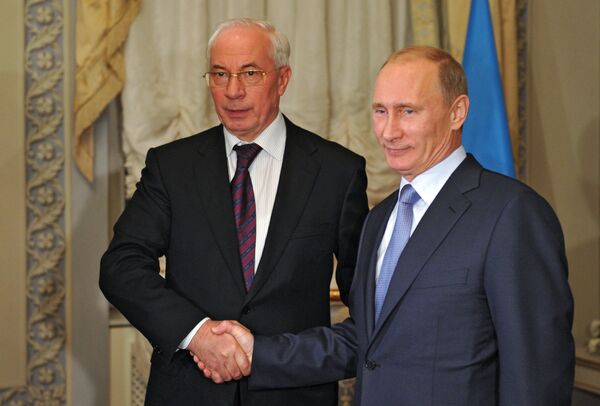 The free trade zone agreement between members of the Commonwealth of Independent States (CIS) may come into force in January 2012, Ukrainian Prime Minister Mykola Azarov said.

The free trade zone agreement between members of the Commonwealth of Independent States (CIS) may come into force in January 2012, Ukrainian Prime Minister Mykola Azarov said.

"I hope the treaty will come into force starting from January next year," Azarov said at a meeting with Russian Prime Minister Vladimir Putin.

The treaty, signed by CIS prime ministers on Tuesday, is yet to be ratified by member states.

The agreement eliminates export and import duties on a host of goods. It also contains a number of exemptions that will ultimately be phased out.

The agreement was signed by all the CIS states except Azerbaijan, Uzbekistan and Turkmenistan.

Putin stressed that the deal is "a fundamental document that will lay the groundwork for long-term relations."

The Russian prime minister also discussed with his Ukrainian counterpart the possibility of making reciprocal payments of Russia and Ukraine in Russian rubles.

"It was agreed that finance ministers and Central Bank chairmen of the two states will discuss the issue next week," Putin's spokesman Dmitry Peskov said.

The CIS, a loose association of former Soviet republics, consists of Azerbaijan, Armenia, Belarus, Kazakhstan, Kyrgyzstan, Moldova, Russia, Tajikistan and Uzbekistan. Ukraine has not ratified the CIS Charter but participates in its activities.

The CIS has been trying to form a free trade zone since as far back as the early 1990s and held a summit in Moscow in May in which a draft agreement was presented, but there was no final signature.

Belarus, Kazakhstan and Russia formed their own Customs Union earlier this year.