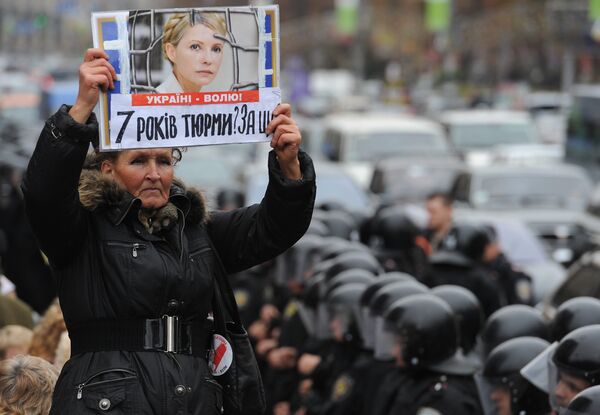 Russia and the West were united in condemnation of Ukraine on Tuesday over the guilty verdict and seven year sentence handed to former Ukrainian Prime Minister Yulia Tymoshenko.

Russia and the West were united in condemnation of Ukraine on Tuesday over the guilty verdict and seven year sentence handed to former Ukrainian Prime Minister Yulia Tymoshenko.

Moscow said it sees an anti-Russian subtext in the case of Tymoshenko who was sentenced to seven years in prison for "signing gas contracts” with Russia, the Foreign Ministry said on Tuesday.

“As a matter of fact, Yulia Tymoshenko was prosecuted for the current, still valid, legally binding agreements between Gazprom and Naftogaz Ukraine,” the ministry said.

It also warned that the verdict must not affect the implementation of bilateral gas agreements.

The verdict against Ukraine’s ex-premier Yulia Tymoshenko proved that the case was politically motivated, a French Foreign Ministry spokesman said on Tuesday.

Russian lawmakers, meanwhile, stressed that the verdict would in no way serve as an argument in Russian-Ukrainian discussions over gas prices.

"The verdict in the Tymoshenko case was pronounced within the framework of a procedure that clearly ignored the defendant’s rights. This confirms that the prosecution of Tymoshenko and her government members is politically motivated,” French Foreign Ministry spokesman Bernard Valero said.

He reiterated his country’s concern about “the degradation of the rule of law in Ukraine.”

The European Union earlier said that if Tymoshenko goes to jail Europe may suspend negotiations on the bilateral agreement on association and free-trade zone, which Ukraine hopes to sign by year-end.

“Undoubtedly, this is a regrettable case, which hampers Ukraine’s European integration at present,” the Ukrainian leader said. “Naturally, the verdict complied with Ukraine’s current Criminal Code, but this ruling is not final. The case is yet to be heard in the Court of Appeal.”

“As far as I know, the European Union sees the trial as a settling of political scores, that’s why it would devalue the stance of Ukraine... in its negotiations on European integration,” Yazev said.

Yazev, who is also the State Duma Deputy Speaker, said the verdict “cannot serve as an argument in Russian-Ukrainian discussions on the gas price.”

"In my opinion, the contract is fair and economically founded and must be observed. There is no basis for it to be reviewed,” he said.

Another lawmaker, a member of the State Duma’s CIS affairs committee Konstantin Zatulin, said Ukraine’s image in Europe has suffered a serious blow “due to the fact that an opposition representative has been sent to prison on, in fact, politicized charges, even though they were made to look like criminal ones.”

“I see it as a mistake by the Ukrainian authorities, which may be costly in the future,” Zatulin said. “At best, it would seriously hamper Ukraine’s plans in Europe and create ambiguity in relations with Russia.”