Right Cause has enough money for election campaign 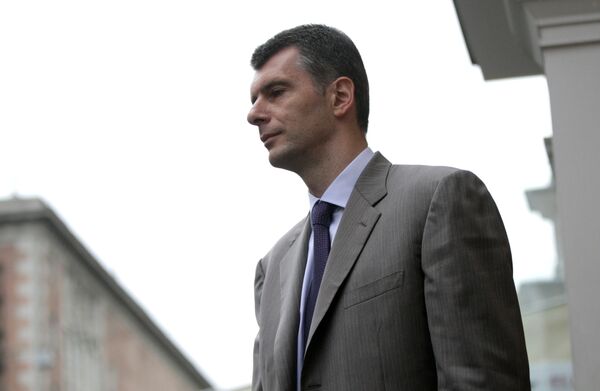 © RIA Novosti
Subscribe
The Right Cause party is confident that it will have enough money for State Duma elections even after it returns all the donations made in support of its former leader, billionaire Mikhail Prokhorov.

The Right Cause party is confident that it will have enough money for State Duma elections even after it returns all the donations made in support of its former leader, billionaire Mikhail Prokhorov.

Prokhorov’s spokesman said on Wednesday that Right Cause should return 650 million rubles ($21 million) to the oligarch’s supporters, and party officials have promised to do that. Party spokesman Yaroslav Volpin said there was 730 million rubles in the party’s account.

“Of course we will have to raise money, but it can be easily solved…We will find 350-400 million rubles by ourselves without any question. It is not a huge sum,” said Vyacheslav Smirnov, one of the party's candidates for a Duma seat.

He promised that all the money invested in the party during Prokhorov’s leadership would be paid back.

The No. 2 in the party, Andrey Bogdanov, added that donations were still coming to the party’s account. “That is why nobody can definitely say how much money will be spent on the election campaign. It could be 350, 400 or 700 million rubles.”

Prokhorov left the party in mid-September after delegates to the party conference split into two factions. As a result, there were two rival party congresses on September 15. At one, leader Mikhail Prokhorov was dismissed from his position. At the other, Prokhorov said a “forcible takeover” of the party was underway and announced his departure, saying he planned to form a new political movement.

Prokhorov said his supporters – individuals and companies – wanted their money back. He himself contributed “a very small sum.”

At a meeting of the remade party, Right Cause party members approved an election program and a list of candidates. Andrey Dunaev tops the list, followed by former presidential candidate Andrey Bogdanov and professional tennis player Anna Chakvetadze. Selection of a party leader was postponed until after the Duma election. Dunaev said that if the party got into the State Duma, he would head it.

Andrey Bogdanov said that “the party has no allies, as all the other parties come from the previous century. We consider ourselves new, young, from this century.” He added that Right Cause’s supporters were “those who are tired of the people on TV…those who are tired of the previous century,” a group that he estimates includes more than 30% of the electorate.

“Yes, maybe half of these people do not vote, as there is no line for ‘against all’. This line is provided by our party. By voting for Right Cause, they will vote against all, everyone who came from the previous century,” said Bogdanov.

He added that the party would fight to get 7% of the vote, the threshold for winning seats in the Duma. “If we manage to get 7% out of that 30%, it would be great.”

Tennis player Anna Chakvetadze, the No. 3 on the list, said she joined the party because it was young and everyone in politics “is boring and cloying. I hope our party will be a breath of fresh air for our electorate.”

Meanwhile, one plank of the party’s platform would allow Russians to possess short-barrelled weapons for self defense.

“We are for amendments to gun-control legislation covering short-barrelled guns,” said Vyacheslav Smirnov. He added that short-barrelled guns are allowed in many countries, and many physically and mentally healthy people consider having one pretty normal. A person who “has no problem with his head, is not a drug addict and has no criminal record” should be allowed to have guns.

“The best weapon for self defense is a Makarov pistol,” said Smirnov.

The party also supports a return to the direct election of governors and city mayors, the possibility of electing the Federation Council, lowering and ultimately eliminating the electoral threshold for parliament and easing party registration requirements. Party members believe at least have the seats in the State Duma should be filled in single-constituency elections among candidates who are members of one or more registered parties.

Right Cause members also believe gas should be priced in the range 15-17 rubles per liter. The party also suggests reducing taxes for small and medium businesses and setting a moratorium on changing tax rates for 5-10 years.