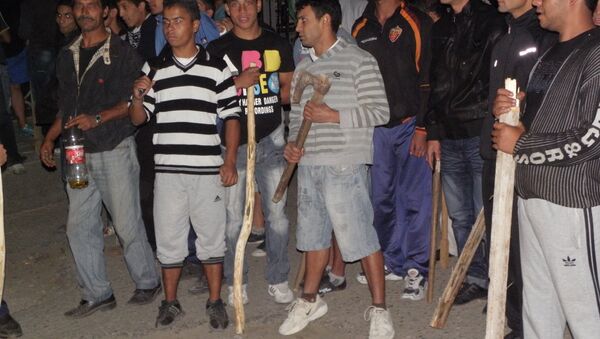 © Photo : Bulgarian agency Bgnes
Subscribe
The Bulgarian capital Sofia will be threatened with filth and stench next week if attacks take place on Roma communities in the city during anti-Roma demonstrations on Saturday, Bulgarian Roma leader and EuroRoma leader Tsvetelin Kychnev said.

The Bulgarian capital Sofia will be threatened with filth and stench next week if attacks take place on Roma communities in the city during anti-Roma demonstrations on Saturday, Bulgarian Roma leader and EuroRoma leader Tsvetelin Kychnev said.

Most of the Roma working in Bulgaria are cleaners, rubbish-collectors and hotel staff.

“No-one will be here to clean up, because its only our people doing this work,” Kychnev said. “If there are attacks on Roma then no-one will be around to do it.”

Mass demonstrations against the Roma broke out across the country this week after a minibus owned by Roma baron Kill Rashov killed a 19 year-old Bulgarian girl, Angela Petrova, in an accident near the village of Katunitsa.

Police arrested hundreds after protests broke out across Bulgaria after the tragedy, and seized knives, batons and other weapons. Over three thousand took to the streets in an anti-Roma incident in Plovdiv, and other protests took place in Pleven, Varna, Burgas and Sofia.

Roma communities living in the Bulgarian capital Sofia will stay in their home districts where they live together, during the mass protests against them on Saturday, Kychnev said.

Thousands are expected to join the largest demonstrations this week on Saturday evening in Sofia, including far-right radicals, biker gangs and football fans.

“I am not letting them go out leave their districts at all,” Kychnev said. I will say to them there – ‘we don’t have the right to attack anyone, but we have the right of self-defense, granted to us by the constitution of Bulgaria and God, if anyone attacks us’” he added.

Kychnev said he would stay in a café in the Fakultyet district of the city which will act as the Roma’s headquarters during the protests.

The Krasnaya Polyana region of the Fakultyet district is home to 55,000 Roma, he said.