AK-74 dismissed by the army 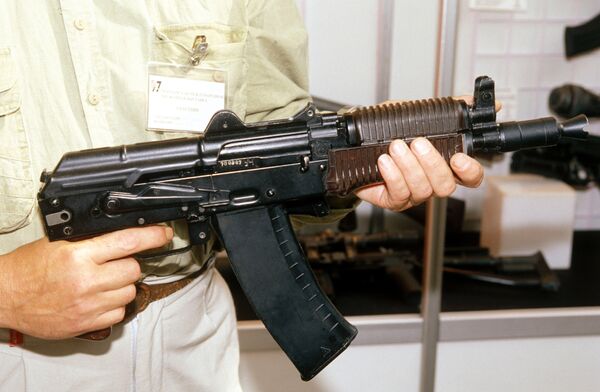 Russia's Chief of the General Staff Nikolai Makarov has reported that the country's military have stopped buying the Kalashnikov. In the near future, they will do away with their old firearm inventories and wait for a new rifle's adoption. However, it will not be an easy choice.

Russia's Chief of the General Staff Nikolai Makarov has reported that the country's military have stopped buying the Kalashnikov. In the near future, they will do away with their old firearm inventories and wait for a new rifle's adoption. However, it will not be an easy choice.

Commenting on the purchase of AK-74 rifles, Makarov said they have renounced them. The reason is simple: the Defense Ministry must partially reduce the vast stocks of war reserve weapons and equipment that it inherited from the Soviet era. The amount of weapons in the country's reserve depots is enough to arm almost all the adults in the country.

Now the ministry has decided to get rid of excessive arms. Explaining the decision to give up the purchase of Kalashnikov rifles, Makarov said: "First of all, it was caused by the fact that the country's mobilization reserve stocks, including those of assault rifles, exceed the requirements by dozens of times."

Several major structural changes have taken place in the course of the army reform carried out under Defense Minister Anatoly Serdyukov since 2009. The so-called "cadre units" have been practically eliminated. Produced by the Soviet mass mobilization approach, these units represented a kind of skeleton of a normal army unit.

As a rule, such a unit had depots of partially mothballed equipment and arms and a reduced personnel (sometimes 8-10 times less than the normal strength of a regular unit). During wartime, cadre units received conscripts and prepared them for combat.

The country's military leaders have decided to dismiss this system as archaic and clumsy and announced the transition to a network of smaller brigades that are mobile and always maintained at higher combat-readiness and full war strength.

In addition, the army underwent one more reduction since 1991.

To sum up, now the army does not need to purchase AK-74s. In theory, enterprises can receive from the military either an order for upgrading the existing assault rifles or take part in a tender for the new ones designed for the new army.

The most interesting point in modernization is that it can involve a host of private ordnance-producing companies on a tender basis. A one-time contract to purchase hundreds of thousands of "new old" automatic rifles from their producer (Izhmash - the Izhevsk plant) is the same as buying from a monopoly. Meanwhile, a tender for an upgraded rifle with state contract guarantees can be won by virtually any company that comes up with a good offer.

After all, there are plenty of firms in the West that are involved in gun tuning under contracts with private military corporations. Interestingly, a typical AKM (7.62x39) is the favorite of mercenaries and one of the most popular guns among private military companies in Iraq and Afghanistan. Russia also has a number of companies involved in tuning Kalashnikov rifles.

Russia has been adopting a new state defense order practice recently. The Defense Ministry has become very sensitive to prices and has fallen out with defense monopolies. It is now not too difficult for small firms to take part in an upgrading tender, which can lead to the emergence of a highly competitive environment and, consequently, to prices that are attractive for the military.

The line of heirs

The modernization of old weapons is good as a transitional measure or a means to maintain combat effectiveness. According to some sources, the Defense Ministry is directly interested in adopting new firearms and no longer intends to buy old ones.

The Soviet army was equipped with AK-74s in the mid-1970s. Even at that time, some experts grumbled that the army had chosen far from the best option - to please the renowned Izhmash.

At any rate, the AK-74 proved to be a sound rifle. Now, 40 years later, the domestic arms industry is trying to obviate the major design drawback of all Kalashnikov modifications - when the rifle is fired, its action moves sharply, which shifts the rifle from the line-of-sight and decreases fire accuracy.

Izhmash made an attempt to design a rifle with a "balanced" automatic recoil system. It presented the AN-94, designed by Gennady Nikonov since the late 1970s and advertised in the 1990s as an innovation rifle to replace the legendary AK.

However, trials, including those during military operations in Chechnya, clearly revealed its weaknesses and strengths. True, the AN-94 is a good, accurate rifle for a well-trained sniper, but it is expensive, difficult to service, and wayward.

It has nothing in common with the AK-74 and AKM, which are cheap and simple rifles for massive armies. Even dragged through dirt, they will still fire without any jams or failures. Combat and testing practice shows that the AN-94 can be used by special units with some reservations, but is not suitable for regular motorized infantry troops. It does not even have a new professional look.

In the 1990s, Izhmash presented upgraded Kalashnikov rifles - the so-called AK-100 series with options for three calibers - domestic 5.45 and 7.62, and NATO's 5.56. Some were exported, and others were purchased by Russian security and law enforcement agencies. For example, the Federal Security Guard Service and the Federal Service for the Execution of Penal Sentences bought the AK-103 with a 7.62 caliber. However, the army - the best customer - is not yet interested in these rifles. Incidentally, the 100 series featured recoil-balanced AK-107s that were much more accurate than the basic model (AK-74). The AK-200 is the recently developed, latest derivative of the old rifle.

The AEK-971 is one more model of a modern balanced-recoil firearm. In the late 1980s, the AEK-971 lost the Defense Ministry's tender to the AN-94, although it is simpler and cheaper.

Its automatic and semi-automatic firing is not as accurate as the AN-94's, but it has a higher long range accuracy. Naysayers believe the AN-94 was chosen due to pressure on the part of the all-powerful Izhevsk lobby - the AEK-971 was designed by competitors from the Kovrov-based Degtyarev plant.

New rifle for a new army

None of these rifles have been chosen for the army's re-equipment. Military sources say the army is reserved about all these rifles, whether made in Izhevsk or Kovrov. They think these rifles are fine, but do not meet the modern requirements of the Russian army, which will define the performance specifications for the new gun.

International and domestic combat use of weapons has brought about a number of changes in the ways that firearms designs are viewed. Designers have given up the fantasies of the 1980s that often produced futuristic-looking guns at fantastic costs.

No matter how it will look, the Russian rifle must be a reliable gun and a direct heir of its predecessors. It would be best if it has the same ammunition, so it can use the reserve stocks and does not require refitting cartridge factories. It would be better if the rifle is not basic, but adjustable and allows for the easy installment of optical and infra-red sights, laser designators, and other accessories.

Izhevsk designers have good chances of success, but Izhmash, Russia's biggest ordnance center, which is known far beyond its borders, is in terrible shape. The Russian Technologies State Corporation is now actively working on its financial recovery, although it is obvious that Mikhail Kalashnikov's home company will have a hard time without a big army contract and will do everything it can to get one.

The AK rifles will be stored at depots. The fact that the army is no longer buying them does not mean that they will disappear from the military tomorrow.